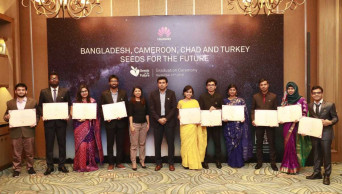 Gas to get pricier likely from next week

Dhaka, Sep 20 (UNB) – Thanks to high import cost of liquefied natural gas (LNG), government is all set to hike gas prices next week. Faridpur, Sept 19 (UNB) – The farmers of Sadarpur upazila are enjoying brinjal farming as it has turned out to be more profitable than many other traditional vegetables. EC to ‘have preparation for limited use of EVMs’

Dhaka, Sept 19 (UNB) – The Election Commission will have the preparation to use electronic voting machines (EVMs) in at least one polling station of 300 constituencies each in the general election to be held in December next. Dhaka, Sept 18 (UNB) - National Board of Revenue has decided to go tough against the business entities which will not install electronic fiscal device (EFD) from November 1 in city corporation areas and from December 1 in district towns. Chapainawabganj, Sept 17 (UNB) – Farmers of Nachole upazila in the district are showing more interest in cultivating dragon fruits commercially sensing its profitability and favourable growing condition.   The juicy fruit is known as ‘pitaya’ in Thailand and the origin of the fruit in South America. Dragon fruit belongs to cactus species and its scientific name is “Pitay”.   Rafiqul Islam along with three of his friends first started to cultivate the fruit on experimental basis in Kendobona area of the upazila.   After getting some profit, their became more interested in cultivating the profitable fruit on large scale.   Watching videos on dragon fruit cultivation on Youtube channel several years ago, Rafiqul of Balugram village in Gomostopur upazila, became enthusiastic to grow dragon fruit himself.   After consultation with the Department of Agriculture (DAE) and other people concerned, he along with his friends started to cultivate it on a six-katha land investing around Tk 1 lakh. At present, they have more than 300 dragon fruit trees in their orchard.   Although they could not make a good profit in the first year, they started getting it from the second year.   Mentioning that the cultivation of dragon fruit is profitable, Rafiqul said they are expecting good profit this year, adding, "The cultivation process is not only easy but also the required investment is very low."   Looks like cactus, each dragon tree lasts for 20-30 years and gives 20-25 fruits each season. Though the fruit is new in the country, there is a demand of the fruit among people, said Rafiqul.   He said they sell the fruit to local customers for Tk 300-400 per kilogramme.   Rafiqul’s friend and business partner Nur-e-Alam Siddiqi Babu said the demand of the fruit is increasing as it looks beautiful and the taste is also good.   Many farmers of the district are coming to see their orchard and after seeing their success, many of them showed interest in dragon fruit farming.   Agriculturist Dr Md Saifur Rahman, deputy director of Chapainawabganj Horticulture, said, “We have got success cultivating dragon fruits in our centre. Soil and weather of the district are favourable for the fruit. Besides, the taste is very same as dragon fruits grown in other countries.”   Mentioning that dragon fruit farming is profitable, he also said that there are many seasonal fruits from May to October in the country. “But, very few are grown in the period of September to October and dragon fruits are available in this time. So, the farmers can make a very good profit from selling it,” the horticulturist said.   He also said that the fruit is very nutritious and helps to control high blood pressure and diabetes.   They are encouraging local farmers by visiting their orchards as well as providing training on how to cultivate the fruit, he added. Dhaka, Sept 16 (UNB) – BNP is getting ready to unveil its long-awaited election-time ‘supportive-government framework’ in line with the thoughts of other opposition parties involved with the process of forging a ‘national unity’ to hold the next polls in a credible manner. Dhaka, Sept 16 (UNB) - The Rohingya issue, among other pressing global concerns, will come up prominently in the upcoming 73rd UN General Assembly for the second consecutive year as a number of countries, including Bangladesh, will raise it seeking a sustainable solution to the crisis, officials said. Dhaka, Sept 15 (UNB) – A Bangladeshi physicist of Princeton University has led an international research team in discovering a novel quantum state of matter that can be ‘tuned’ at will — and it’s 10 times more tunable than existing theories can explain.
Huawei lauds Bangladeshi ICT talents
Gas to get pricier likely from next week
Faridpur farmers tell the tale of successful brinjal farming
EC to ‘have preparation for limited use of EVMs’
NBR moves to stop VAT evasion
C’nawabganj farmers see bright prospect in dragon fruit farming
Beanibazar Mukhtijoddha Complex remains locked since inauguration
BNP getting ready to unveil ‘supportive-govt’ formula
Rohingya, other global issues to dominate 73rd UNGA
Bangladeshi scientist leads discovery of a novel quantum state of matter ‘Goblin Mode’: What does Oxford Dictionaries’ word of the year mean?