Dhaka’s air quality improved in lockdown, a blessing in disguise!

The air quality of Dhaka city has made a marked improvement by some 45pc on average a day during the first seven days of the Covid-19 lockdown due to the low level of emissions. According to a survey conducted by Center for Atmospheric Pollution Studies (CAPS) of Stamford University Bangladesh, four reasons effectively worked behind the strange improvement in the air quality.   Read Dhaka keeps grappling with ‘hazardous’ air It said low traffic flow, suspension of road renovation and construction works and lack of activities to burn wastes led to the improvement in the air quality though it is said to be a short-lived gain. Even the air pollution declined by 70pc in some areas in the city during the April 14-21 period, the survey says. Read No respite from pollution as Dhaka’s air quality still ‘unhealthy’ The survey was carried out under a project titled “Promoting Democratic Governance and Collective Advocacy for Environmental Protection in Dhaka City” with financial support from USAID and UKAid. As part of the survey, the air quality was measured using automatic equipment for eight hours a day in 10 areas of the capital. Also read: Dhaka is world's most polluted city The measurement showed that the air quality has improved on average 45pc a day from April 14 to 21 last. Can Dhaka improve its air quality?

Many of those who live in Dhaka these days say that they will look at other cities to move out if there is any opportunity as they find the capital city unlivable due to its worsening air pollution. “Living in Dhaka has become a personal battle because its air has become too unhealthy for living,” says Mujibul Haque, a retired engineer.    The residents of Dhaka breathed with the worst and unsafe air from January to March this year as they did during the same period in 2017. During this 90-day period (January-March 2021), the air quality was recorded as ‘hazardous’ for 12 days, ‘very unhealthy’ for 58 days, ‘unhealthy’ for 19 days and ‘unhealthy for sensitive groups’ for one day in Dhaka, one of the most polluted cities in the world. Also read: Dhaka’s air quality still ‘unhealthy’ despite rain

On Wednesday (March 24, 2021), Dhaka occupied the third position in the list of world cities with the worst air quality. The capital's air quality index (AQI) was recorded at 198 around 11.35 am. India’s Delhi and Nepal’s Kathmandu occupied the first two positions in the list, with AQI scores of 266 and 213, respectively. Read Dhaka is world's most polluted city An AQI between 101 and 200 is considered 'unhealthy', particularly for sensitive groups. Similarly, an AQI between 201 and 300 is said to be 'poor', while a reading of 301 to 400 is considered 'hazardous', posing serious health risks to residents. AQI, an index for reporting daily air quality, is used by government agencies to inform people how clean or polluted the air of a certain city is, and what associated health effects might be a concern for them. Read Public health issues like air pollution, environment not getting due attention In Bangladesh, the overall AQI is based on five criteria pollutants – Particulate Matter (PM10 and PM2.5), NO2, CO, SO2, and Ozone (O3). The Department of Environment has also set national ambient air quality standards for these pollutants. The densely populated capital of Bangladesh has long been grappling with air pollution issues. The air quality usually improves during monsoon. Read Lung cancer on the rise in Bangladesh: Report A report by the Department of Environment (DoE) and the World Bank in March 2019 pointed out that the three main sources of air pollution in Dhaka "are brick kilns, fumes from vehicles and dust from construction sites". Air pollution consistently ranks among the top risk factors for death and disability worldwide. Breathing polluted air has long been recognised as increasing a person’s chances of developing heart disease, chronic respiratory diseases, lung infections and cancer, according to several studies. Also Read: No respite from pollution as Dhaka's air quality still 'unhealthy' As per the World Health Organization (WHO), air pollution kills an estimated seven million people worldwide every year, largely as a result of increased mortality from stroke, heart disease, chronic obstructive pulmonary disease, lung cancer and acute respiratory infections. Over 80 percent living in urban areas which monitor air pollution are exposed to air quality levels that exceed WHO guideline limits, with low- and middle-income countries most at risk. Also Read:  Dhaka keeps grappling with 'hazardous' air

There is no respite for Dhaka dwellers from unhealthy air as it again ranked worst in the Air Quality Index (AQI) on Sunday morning and its air was classified as ‘hazardous’.

No respite from pollution as Dhaka’s air quality still ‘unhealthy’

Dhaka, one of  the most polluted cities  in the world, ranked second worst in the Air Quality Index Monday morning . Dhaka may no longer be the world's most polluted city, but the densely populated capital's air quality still remains 'unhealthy'. Here's some good news. Dhaka is no longer the world's most polluted city. That's Lahore now. 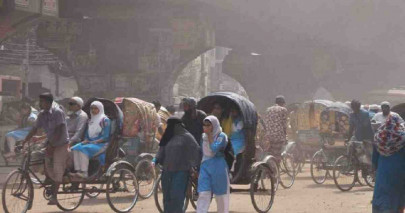 Dhaka, one the most polluted cities in the world, ranked  the 3rd worst in the Air Quality Index (AQI) on Tuesday afternoon.

Dhaka, one the most polluted cities in the world, ranked worst in the Air Quality Index (AQI) on Monday morning.

Bangladesh vs India ODI: Shakib strikes twice, Rohit and Virat out within 3 balls