No disagreement over Bhasan Char except few recommendations: Shahriar

State Minister for Foreign Affairs M Shahriar Alam on Wednesday said Bhasan Char is now a settled issue and hoped that international agencies will get engaged taking responsibility of Rohingyas in Bhasan Char, the way they are doing in Cox’s Bazar Rohingya camps.

“Bhasan Char isn’t an issue now. It's resolved,” he said, mentioning that the UN team and diplomats who have visited the Bhasan Char did not raise any “disagreement” but there are a few recommendations.

As of now, the government of Bangladesh has relocated over 18,500 Rohingya to Bhasan Char in several phases out of a planned relocation of 100,000 Rohingyas.

“We’re managing their basic humanitarian needs from our own exchequer -- given that the UN is yet to commence their operation at the island,” said the State Minister while addressing a webinar as the chief guest.

Bangladesh Institute of International and Strategic Studies (BIISS) organised the webinar on “The Rohingya Crisis: Response of the International Community and the Repatriation Process”.

“UN is talking about it repeatedly but nothing effective is happening,” Shahriar said, adding that some countries are not spending much time repatriating Rohingyas.

Also read: 1,700 more Rohingyas on their way to Bhashan Char

Bangladesh also spent over USD 350 million from its own budget to develop Bhasan Char with better infrastructures and amenities to relocate a portion of Rohingyas from the over-congested and disaster-prone camps in Cox’s Bazar.

The State Minister said the UN and other countries are yet to do what they were supposed to do towards Rohingya repatriation. 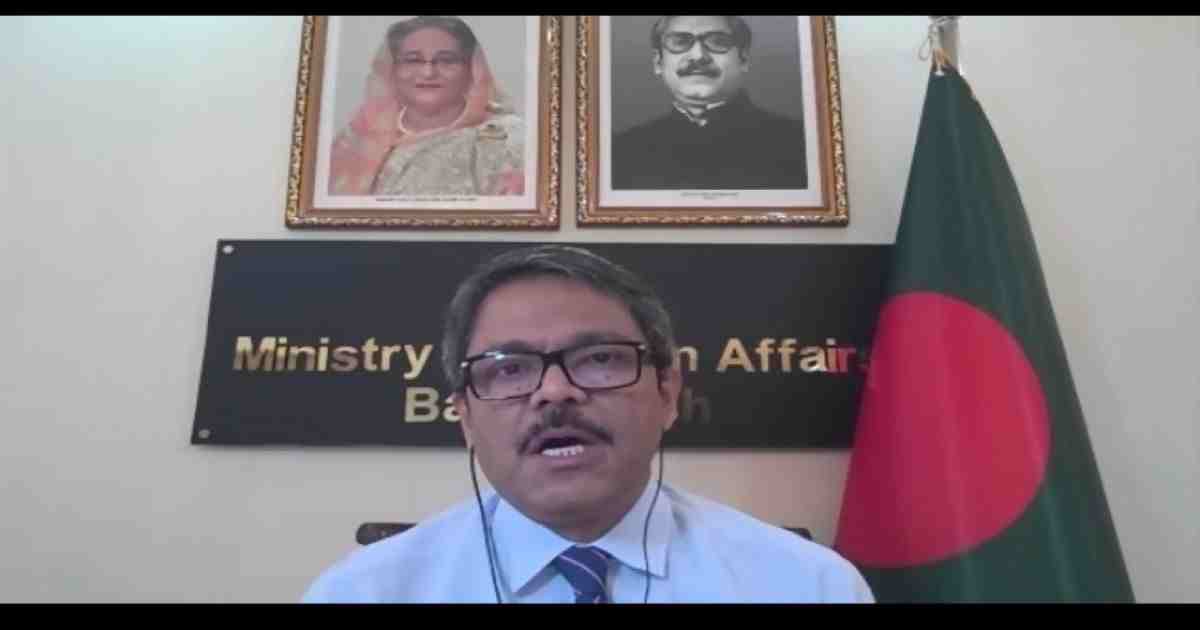 “We fervently call upon the international community to engage deeply with Myanmar in a meaningful way to ensure the creation of a conducive environment in Rakhine and find a lasting solution for the unfortunate community,” he said.

Shahriar said key nations in the region and ASEAN countries with diverse direct leverage over Myanmar have added responsibility in building confidence among the Rohingya and ensure peace and stability of the region.

That will be the real service and most important service for an ethnic minority, the Rohingya – seriously facing the threat of extinction due to ‘ethnic cleansing’, as the UN has termed, he said.

“Only through our concerted efforts, sustained repatriation can become a reality,” said the State Minister.

Shahriar said while they are committed to continuing their efforts, albeit, they will have to be reminded of the ongoing political situation of Myanmar.

He said the international community should make a concerted effort to stabilise the situation in Myanmar and effectively prevent any further mass displacement or cross-border exodus.

“The repatriation of all displaced people to Myanmar remains a compelling priority for Bangladesh. The displaced Rohingyas are also desperate to return home with safety and dignity at the earliest possible time,” he said.

The outcomes and experiences of bilateral diplomatic efforts of working with Myanmar on the Rohingya issue clearly suggest that Bangladesh alone cannot solve the crisis, said the State Minister.

Given the gravity of the crisis of over a million Rohingya and the mindset of the Myanmar authorities, he said the international community must not shy away from their responsibility to resolve the crisis and relieve Bangladesh from the burden that Myanmar has imposed upon it. Professor Imtiaz Ahmed, Department of International Relations, University of Dhaka, presented a paper on “The Role of India and China in the Rohingya Repatriation Process”.

Besides, Abu Salah Md. Yosuf, Senior Research Fellow, BIISS, presented a paper titled “The Dilemmas of the US Sanctions against Myanmar”.

Emdad Ul Bari noted that the major exigency for Bangladesh now is the sustainable repatriation of the Rohingyas.

Since Bangladesh follows a policy of peaceful settlement of disputes with the neighbouring countries, therefore, Bangladesh needs to develop an effective negotiation framework where the country can engage all the stakeholders to ensure the return of the Rohingyas in their own land, he said.

US may consider taking Rohingyas from Bangladesh: FM

US may consider taking Rohingyas from Bangladesh: FM

UN should help Rohingyas in Bhasan Char as per mandate: FM

Malaysia imposes restrictions on entry of citizens from 12 countries