‘Bangladesh on the cusp of a second liberation’

C. Raja Mohan, director of the National University of Singapore’s Institute of South Asian Studies, has said Bangladesh has shown increasing agency in playing on the geopolitical chess board and taking advantage of its external environment. “Today, Bangladesh is on the cusp of a second liberation—one that would end its relative isolation and allow Dhaka to play a stronger role in the region and beyond, seeking new maritime possibilities in the Indo-Pacific,” he mentioned in his latest article titled “50 Years After Independence, Bangladesh Bursts Into Geopolitics” published by Foreign Policy. The former member of India’s National Security Advisory Board, said the country is on the cusp of a second liberation - one that would end its relative isolation. At the end of the article, he mentioned that Bangladesh knows that stronger ties with the United States and Japan would reduce excessive reliance on either India or China and widen its choices. “Unlike many other countries in Asia, it did not blindly embrace China’s Belt and Road Initiative, but sought to engage multiple partners. It now has similar opportunities in the maritime rivalry between China and the Quad,” the article reads. Raja Mohan said the country is on a firm trajectory to graduate out of the category of least developed countries by 2026 and likely to jump into the 25 largest economies worldwide by 2030. Also read: Don’t allow development and democratic progress to be disrupted: PM International development institutions praise Dhaka’s success in reducing poverty, improving life expectancy, enhancing literacy rates, and empowering women. Relations with India Over the last decade, he said, under the stewardship of Prime Minister Sheikh Hasina, Bangladesh has transformed the difficult relationship with India into a productive partnership. Working with successive Indian prime ministers, Manmohan Singh and Narendra Modi, she pressed for a grand bargain: cooperation to combat terrorism, better Bangladeshi access to India’s market, resolution of disputes over river-water sharing and land borders, and restoring trans-border connectivity cut off since Partition. “The forward movement on this broad range of issues has generated an unprecedented depth to the bilateral relationship. Dhaka now sees itself not as landlocked, but as land-linked and river-linked to India and the other countries in the region. The deepening India-Bangladesh cooperation helps the subcontinent transcend the negative consequences of Partition—at least in the east,” Raja Mohan wrote. As Bangladesh marks the 50th anniversary of its declaration of independence from Pakistan, there is widespread admiration for its remarkably successful economic and social transformation, he mentioned. Also read: Modi lauds Bangladesh’s remarkable growth under Hasina's leadership “Less noted are the profound geopolitical consequences of Bangladesh’s economic rise, including a shift in South Asia’s center of economic gravity to the east and the reintegration of an eastern subcontinent that was once divided by animosities and barely penetrable borders,” he said. The recognition of Bangladesh’s economic transformation is not, however, accompanied by an appreciation of its growing geopolitical significance. “For far too long, when we think about South Asian geopolitics, the focus has been entirely on India and Pakistan. The India-Pakistan academic establishment, media commentariat, and think-tank industry—myopically focused on the tick-tock between New Delhi and Islamabad over Kashmir, nuclear weapons, terrorism, and Afghanistan—sucks attention away from the rest of the region,” Raja Mohan wrote. He said Bangladesh’s geopolitical significance is not least a function of its size. “Its population of nearly 170 million is the eighth-largest in the world. The Bangladeshi diaspora is growing as well, currently standing at about 8 million. Besides a large community in the Gulf Arab states, the diaspora is also growing in the English-speaking world.” Also read: India committed to deepening ties with Bangladesh: Modi He said Bangladesh’s special location and political character would not have amounted to much if the nation had not made itself an economic success. “As Bangladesh grows faster than Pakistan, raises its education standards, and controls its once-rapid population growth, it has begun to tilt the region’s economic center of gravity towards the east.  That shift has been accelerated by the uselessness of SAARC due to Pakistan’s reluctance to engage India economically, which has changed the focus to subregional economic cooperation between India, Bangladesh, Bhutan, and Nepal—as well as transregional cooperation with Myanmar and Thailand,” Raja Mohan wrote. A symposium titled “Values or Their Absence in Foreign Policy” began at Six Seasons Hotel in the city on Saturday morning. 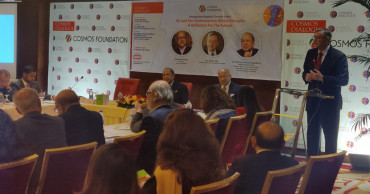 Cosmos Foundation’s dialogue on ‘EU and the Contemporary Global Scenario: A Reflection for the Future’ began at a city hotel on Saturday morning.
‘Bangladesh on the cusp of a second liberation’
Cosmos Dialogue on Foreign Policy begins in city
Cosmos dialogue on EU’s contemporary relevance begins