Life term for GK Shamim, 7 others in arms case

A Dhaka court today sentenced eight people, including GK Shamim – a disgraced contractor who gained infamy during the “casino raids” of late 2019, to life term imprisonment in an arms case. The other seven are all GK Shamim’s bodyguards: Md Zahidul Islam, Md Shahidul Islam, Md Kamal Hossain, Md Shamsad Hossain, Md Aminul Islam, Md Delwar Hossain, and Md Murad Hossain. Third Additional Metropolitan Session Court Judge Sheikh Samidul Islam passed the judgment. Read: ACC approves chargesheet against GK Shamim They were brought to the court from jail in the morning. GK Shamim, who was known as an influential contractor of Sabujbagh, Basabo and Motijheel areas of the capital, was arrested on September 20, 2019. Rapid Action Battalion (Rab) seized illegal firearms and fixed deposit receipts worth Tk 165 crore, Tk 1.8 crore in cash and foreign currencies from his house and office at Niketan. Read: GK Shamim indicted for money laundering The elite force filed three cases – one under narcotics control, one under money-laundering prevention and the other under arms act – against Shamim with Gulshan Police Station on September 21. In October 2019, Rab filed a charge sheet against the accused in the arms case. The official trial proceeding in the case began on February 28, after the court framed charges against the eight accused rejecting an appeal for acquittal. Read GK Shamim: Court sets Sept 25 for verdict in arms case Customs Intelligence authorities seized 22.99 lakh Saudi Riyals worth Tk 6 crore from Hazrat Shahjalal International Airport, officials said on Thursday. Customs officials said a passenger identified as Mamun Khan was scheduled to go to Dubai by a flight of Emirates Airlines around 9:30 pm on Wednesday. Read:Two held with 2.30 lakh USD at Dhaka airport During scanning, the customs officials found the foreign currencies in his luggage and seized those. However, no one was arrested as the owner of the luggage managed to flee leaving it behind. The foreign currencies were deposited to the Custom House.

Why Bangladesh Inc is wary of a sturdy dollar

A stronger US dollar is usually grody news for emerging market economies with heavy dollar-denominated debt. And Bangladesh is no exception. In this country, the corporate sector has borrowed heavily in foreign currencies from external sources at lower interest rates. A stronger dollar has now made their foreign debt expensive, hitting them really hard as they struggle to tide over the Covid-induced economic slowdown. Those entrepreneurs who took hassle-free loans from abroad some five years ago -- when the interest rate on bank loans in Bangladesh was more than 12% -- are now facing the wrath of the appreciating dollar, having forced to count 10% more on money they borrowed at just 3-4% interest. The approved debt from external sources for Bangladesh’s private sector stood at USD 14,003.95 million as of June 2021, of which USD 9,601.27 million had been repaid along with USD 677.37 million interest. In the January to March quarter of the last financial year, the approved external debt for the private sector was USD 617.95 million, while it declined to USD 230.81 million in the last quarter of 2020-21 fiscal, as per Bangladesh Bank (BB) statistics. Read: Govt targets 17% expenditure of GDP for next two fiscals: Document Separate courts in Dhaka on Sunday placed ‘Golden Monir’ on an 18-day remand in three cases filed over the recovery of foreign currencies, firearms and liquor from his Badda residence.   Dhaka Additional Chief Metropolitan Magistrate Court Judge Abu Bakar put him on a 7-day remand in each two cases filed under the Arms Act and the Special Powers Act. 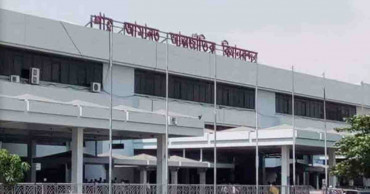 One held 'with foreign currencies' at Ctg Airport Biden to end COVID-19 emergencies on May 11
Row breaks out in JS over ruling party MP's jibe at Ershad
Ekushey Book Fair to span entire February again after two years
EDF alternative: Tk10,000 crore fund to be operated through 49 banks
191 news portals to be blocked for anti-state propaganda: Info Minister