Bangladesh received US $1642.75 million (1.64 billion) inward remittance till July 21, thanks to Eid-ul-Azha when Bangladeshi migrants sent more money to families to celebrate one of the biggest festival of Muslims, according to data from Bangladesh Bank. It means, on an average the expatriates sent $78.22 million remittance in to the country during July 01-21, the opening month of the fiscal year 2022-23. In June, the last month of the fiscal year, the expatriates sent home $1.83 billion remittance through the banking channel, said the BB figures available on Monday. Also read: Digitalization: Global remittances flows expected to reach US$5.4 trillion by 2030 Bangladesh received the highest $24.77 billion remittance in FY2020-21, amid global travel restrictions amid Covid-19 pandemic. In FY 22 remittance income fell to $21.03 billion following the lifting of travel restrictions and sending of money through unofficial channels, people involved with the issue said. The sector insiders and experts suspected that around $2 billion remittances entered Bangladesh through unofficial routes despite stimulus incentives offered by the government to use official channel. Also read: Cash incentive on remittance to remain unchanged at 2.5 per cent Sources said a good number of Bangladeshi workers in the Middle East, Malaysia, the USA and Europe failed to send money through proper baking channels for lack of valid documents. This led to the increasing use of illegal hundi and other informal channels by the expatriates, they said speaking on conditioned they can’t be identified. According to BB, during July 1 and 21 , six state-owned bank received $254.92 million inward remittance, 2 specialized banks received $27.69 million, and 41 private commercial banks received $1356.22 million while 9 foreign commercial banks received $3.94 million.

With the release of three much-anticipated films (Poran, Din - The Day and Psycho) on the occasion of Eid-ul-Azha this year, multiplex and single screen owners are enthralled to observe the audience response of the moviegoers after two devastating business years. Although several hall owners are not satisfied with the absence of Dhallywood megastar Shakib Khan’s new films which always brought profit in the previous years, many are surprised to see the line of the audience for the tickets of the three mentioned films. Among the releases, Raihan Rafi-directed film ‘Poran’ which is based on the infamous Rifat murder case from Barguna in 2019, has been leading the race in terms of audience response and ticket sales. On Friday, this correspondent visited several branches of Star Cineplex in the city and observed the crisis of tickets for the Eid films. Interested moviegoers pilled up in front of the ticket counters to grab the tickets for the same-day shows, however, failed to manage due to the crisis.  Even the cast and crews of these films are not getting the tickets, which is a rare scenario in the industry. Many audiences have been looking for the next-day schedules, to be entertained with these Eid releases. Read:Three films to enthral moviegoers on Eid-ul-Adha “This is utterly surprising and at the same time a very much satisfactory scenario that our audiences are showing this much interest to watch our Bangladeshi films,” Star Cineplex Media and Marketing Department's Senior Manager Mesbah Uddin Ahmed told UNB. He informed UNB that due to audience demand, Star Cineplex had to increase the shows of ‘Poran’ which previously had less number of screens. Ananta Jalil’s ‘Din - The Day’ is also getting good responses, he said. The cast and crew members of these three films are also moving from one district to another in order to promote their films, namely ‘Poran’ and ‘Psycho’. These two films are getting very good responses in the first week, while ‘Din - The Day’ also is getting a dominant response across 115 screens all over Bangladesh, which secured the highest screens amongst these three films. “After the massive loss we suffered due to the Covid-19 global pandemic, these incredible crowd responses are again making us hopeful. These films are boosting the industry and we hope that the filmmakers will continue the practice of better filmmaking so that the audience response remains positive, not only for the festive occasions but throughout the years,” Mesbah told UNB. 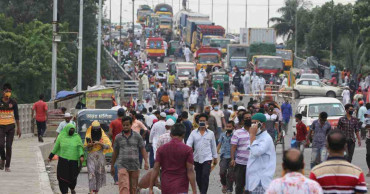 Over 65 lakh mobile phone users left Dhaka on July 8 and July 9 to celebrate Eid-ul-Azha with their near and dear ones at their native places. A total of 65,78,866 subscribers of different mobile phone operators left the capital in the two days before Eid, Bangladesh Posts, Telecommunications and IT Minister Mustafa Jabbar said in a Facebook post on Monday. Also read: Letting people leave Dhaka amid coronavirus outbreak ‘suicidal move’, experts Eighty percent of the waste of sacrificial animals on the holy Eid-ul-Azha were removed from Dhaka North City Corporation (DNCC) on Sunday, said a media statement signed by Makbul Hossain. However, 11 wards of the city corporation managed to remove 100 per cent of its waste, it said. Earlier, DNCC Mayor Atiqul Islam said that the waste of sacrificial animals will be removed from the streets of Dhaka city within 12 hours. Read: Bangladesh celebrates Eid-ul-Azha amid religious fervour “The city corporation workers are cleaning waste every day and I think 12 hours are enough to remove waste of sacrificial animals,” he said. "We have enough manpower and the Eid vacation of the staff and employees has been cancelled for removing waste soon", added the Mayor.

Prime Minister Sheikh Hasina on Sunday sent greetings to the country’s heroic freedom fighters on the occasion of Eid-ul-Azha, the festival of sacrifices.The prime minister sent flowers, fruits and sweetmeats to the war-wounded freedom fighters and members of the martyred families at Martyred and War-wounded Freedom Fighters’ Rehabilitation Centre (Muktijoddha Tower-1) at Gaznavi Road in the capital’s Mohammadpur.PM’s Assistant Private Secretary-2 Gazi Hafizur Rahman Liku and Assistant Press Secretary ABM Sarwar-e-Alom Sarker handed over the gifts to them this morning.The war-wounded FFs and members of the martyred families expressed gratitude to the prime minister for remembering them on every national day and festivals like the Independence Day, the Victory Day, Eid and Pahela Baishakh.Read: Over 1mn Covid-affected families to get PM’s Eid gift through bKash They lauded the visionary leadership of the prime minister in national development and welfare of the people. They thanked Sheikh Hasina for constructing the Padma Bridge overcoming domestic and foreign conspiracies. They also wished the prime minister good health and long life. Muslims in Bangladesh are on Sunday celebrating their second largest religious festival, Eid-ul-Azha, with prayers and sacrificing animals in the name of almighty Allah. Eid congregations were held at mosques and maidans across the country where devotees offered prayers for world peace and harmony among communities. The main Eid congregation was held at National Eidgah in the capital. Several congregations took place at National Baitul Mukurram Mosque. President Abdul Hamid offered his Eid prayers at the Darbar Hall of Bangabhaban, his official residence along with officials and staff members. The nationwide prayers were followed by slaughtering of sacrificial animals in the name of Allah. The Eid-ul-Azha festival marks Prophet Ibrahim’s willingness to sacrifice his beloved son Ismael showing absolute love for Allah. In their separate Eid messages President Abdul Hamid and Prime Minister Sheikh Hasina urged the people to be imbibed with the spirit of self-sacrifice. Read: Bangladesh to celebrate Eid-ul-Azha Sunday BNP Chairperson Khaleda Zia will celebrate Eid-ul-Azha with her close relatives, including sister Selina Islam and granddaughter Zahiya Rahman at her Gulshan residence on Sunday.  Selina will go to Khaleda’s house bringing traditional food items at noon on Eid, while senior BNP  leaders, including secretary general Mirza Fakhrul Islam Alamgir, will exchange greetings with her in the evening. Talking to UNB, Selina said her sister is still sick and remains under the observation of doctors.  Also read: Khaleda returns home from hospital “So, we can’t always meet her directly any time we desire. As tomorrow (Sunday) is Eid, I will go to her house and spend the day with her,” she said. Selina said Khaleda’s granddaughter Zahia, the younger daughter of late Arafat Rahman Koko, will also spend the Eid day with her. She said some other close relatives, including her younger brother Shamim Eskandar's wife Nasrin Eskandar and mothers-in-law of her two sons, are also likely to meet the BNP chief. Thrice-former prime minister Khaleda, 76, has long been suffering from various ailments, including liver cirrhosis, arthritis, diabetes, heart, kidney, lung and eye problems. Also read: Khaleda to return home from hospital today She returned home after a 14-day stay in the capital's Evercare Hospital on June 24. The hospital visit was prompted by a mild heart attack, that led to doctors inserting an artificial ring, or stent, in one of her arteries where it had 95% blockage.  Two more blockages were found in the arteries of the BNP chairperson through a coronary angiogram, which may require stenting later.

Prime Minister Sheikh Hasina on Saturday urged all Bangladeshis to devote themselves to the welfare of the country and its people in the spirit of sacrifice. "Eid-ul-Azha means the festival of sacrifice. Let us devote ourselves, Engulfed with the spirit of sacrifice, for the welfare of the country and its people," she said in a video message to the people of the country on the occasion of Eid-ul-Azha. Also read: Complete qurbani by second day so cleaners too can enjoy Eid: TaposhShe also urged all to share the joy of Eid-ul-Azha, the biggest religious festival for Muslims alongside Eid ul Fitracross the globe, with all maintaining the tie of brotherhood.She also urged people to maintain the safety measureps to remain healthy."Everyone remain healthy and safe, Eid Mubarak," she said. Also read: Security beefed up in Dhaka for Eid celebrations

Security beefed up in Dhaka for Eid celebrations

Authorities have beefed up security in the densely populated metropolis to ensure smooth celebrations of the holy Eid-ul-Azha on Sunday. Additional security measures have been taken to avoid any untoward situation in the capital on Eid day, said additional director general of Rab, Colonel Md Quamrul Hasan. Also read: Padma Bridge: RAB ensures all security measures in place for inauguration “Though we don't have any specific intelligence input of any possible terror attack on the occasion of Eid, we are not taking any chance,,” he said. "Our men also inspected the overall security measures at National Eidgah Maidan on Saturday. We are also relying on intelligence network," the Rab officer said.
Bangladesh receives $1.64 billion remittance in 21 days of July:BB
Eid-ul-Azha films: Fortune favours hall owners after two deadly years
Over 65 lakh mobile phone users left Dhaka during Eid
Eid-ul-Azha: Over 99.50 lakh animals sacrificed this year
Eid-ul-Azha: DNCC claims to have removed 80pc animal waste
PM sends Eid-ul-Azha gifts to freedom fighters
Bangladesh celebrates Eid-ul-Azha amid religious fervour
Khaleda to celebrate Eid with sister, granddaughter
PM greets nation invoking Eid-ul-Azha's spirit of sacrifice
Security beefed up in Dhaka for Eid celebrations