The waterfalls in Bangladesh are an immense emblem of natural beauty. Nature enthusiasts mingle themselves into these heavenly springs to cherish their souls. However, it is hardly possible to enjoy voluminous water flow in these fountains through all seasons round the year. The profound gift of rain makes its presence felt in the monsoon. The heavy showers make the waterfalls and fountains lively. The magnificent beauty of the waterfalls is visible from mid-July to September. So let's get to know about the most attractive waterfalls in Bangladesh.

This huge waterfall is located in Mirshorai Upazila of the Chittagong division. The special attraction of this waterfall is its nine isolated steps which have not been seen in any other waterfalls in Bangladesh. That is why ‘Khoiyachhora’ is called the ‘Fountain Queen’ of Bangladesh. The fountain is located 4.2 km east of the Dhaka-Chittagong highway on the north side of Borotakia Bazar in the Khoyachhora union of Mirshorai.

Read Message to Zoo Visitors: Don't feed the Wildlife your food for the good of both you and them

You need to come to Mohipal through Feni-bound buses like Star Line or Saudia from Fokirapul or Sayedabad of Dhaka. Then you can get on one of the Chittagong-bound semi-local buses which will drop you off at Borotakia Bazar.

You can get on the main trail of the Khoiyachhora waterfall by walking for half an hour along the village road to the east. After walking for about 1.5 hours along the hilly path through the forest, you will finally see the waterfall.

It is a natural waterfall located in the Kurma area deep in the Rajkandi forest reserve in Kamalganj Upazila of Moulvibazar district. The enthralling murmur of the currents rushing from a height of about 150 feet on a quiet hill evokes a strange addiction in all travelers’ minds. You can’t turn your eyes to the staggering wonders of this waterfall covered with wild herbs after the impassable trail.

Read Sylhet Tourist Places – Where to Go and What to Do

You need to come first to Srimangal via bus or train from Dhaka. From there you can take CNG or jeep for Kolabon Para. There are two trails from Kolabon Para to Humhum: Jhiri Path and Hilly Path. Although the Jhiri route takes a little longer, this route is more beautiful than the hilly route. Thus, it may take about 3 hours to reach Humhum.

If you want to see more than one fountain in one trail then go to Napittachara Trail in Mirshorai, Chittagong. In this one trail, you will see several wonderful springs like Mithachori fountain, Baghbiani fountain, Bandorkhum, and more. Napittachora has become very popular as there are so many waterfalls in just one and relatively easy trail.

Read Rangamati Tourist Attractions – Where to Go and What to Do

You can reach Napittachora Trail on foot from this Noduari Bazaar in a quarter of an hour.

These two fountains are located inside the Sitakunda Ecopark, the first eco-park in Bangladesh, at the foot of the historic Chandranath Hills.

Sitakunda can be reached by mail train from Dhaka or by any bus bound for Chittagong from Sayedabad, Fakirapul, Mohakhali bus stand. Then you have to take a bus/CNG from Sitakunda Bazar and go straight to Ecopark. Buy a ticket, enter Eco Park, and start walking to Shuptadhara.

Read Best Khagrachhari Tourist Spots to Explore in Your Vacation

You will have a 30 minutes walk to the entrance of the Shuptadhara fountain. Then you have to go down about 422 steps to the front of the mainstream of Shuptadhara. After walking for a total of 1.5 hours, the sound of dormant water will come to your ears from a long distance. Another 30-minute walk from Shuptadhara is Shahasradhara stairs. There again you have to go down about 487 stairs. As you descend the stairs, the endless falling of Shahasradhara will be visible.

Amiyakhum is an extraordinary waterfall located in Thanchi Upazila of Bandarban district. This inaccessible waterfall bordering Bangladesh and Myanmar has been described by many as the ‘Bengal Paradise’. 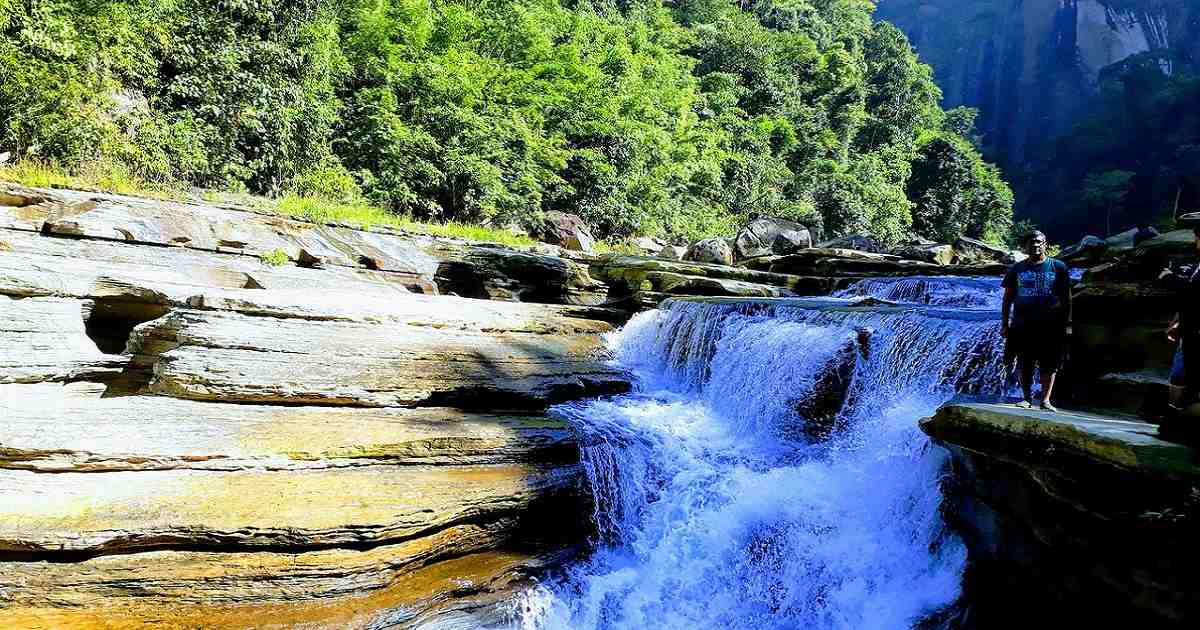 You can take one of the Bandarban-bound buses like Shyamoli/Hanif from Fakirapul/ Sayedabad in Dhaka. After arriving in Bandarban, go directly to Thanchi by bus or jeep. Then follow this route with a guide and set off for Amiakhum:

You can reach Romakri by boat from Thanchi. Take a walk from there for about three hours to the Nafakhum fountain. On the way to a 4-hour journey from Nafakhum to Thuisapara, you can take a break to rest at Jinapara. By enjoying the primitive beauty for about 3.5 hours, you can reach the Amiyakhum waterfall through the Debotapahar.

It is a 380 feet high waterfall located at Baklai village of Nighting mouza in Thanchi Upazila of Bandarban district. This is the highest waterfall in Bangladesh so far. Baklai is a village in Bandarban on the way from Keokradong, the second-highest mountain peak in Bangladesh, to Tajingdong. The village is well known as a camping spot for trekkers. Baklai Falls is located just an hour's walk from here.

First, you need to arrive at Bandarban by bus from Dhaka. Then from Bandarban by bus or jeep (Chander Gari) you can go to Thanchi which is about 79 km away in about 4.5 hours. It takes 8-10 hours to reach Baklai falls from Thanchi Bazar. You will cross some beautiful places on the way of trekking to Baklai.

It is one of the widest springs located in Ruma Upazila under the hill district- Bandarban. It takes two hours to walk from Keokradong to Jadipai waterfall. The stream of clean water flowing down the black rock from about 200 feet later met with the Sangu river.

After coming to Bandarban by bus from Dhaka, you have to take Ruma by jeep (Chander Gari). Ruma Bazaar must be reached by 4 pm, as after that, the army doesn’t allow any departure for Boga Lake.

After reaching Boga Lake, walk from there to Keokradang, then to Pashingpara, the highest village in Bandarban. And after Passingpara, you will get Jadipai falls.

Trekking to Ham Ham Waterfall, Moulvibazar: On the Way to Pass the Impassable