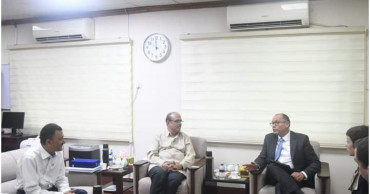 US Ambassador to Bangladesh Peter Haas on Wednesday paid a courtesy call on chairman of the Anti-Corruption Commission Mohammad Moinuddin Abdullah. The ambassador was accompanied by Scott Brandom, political and economic secretary of the US Embassy and Sara Edwards, legal resident advisor of the US Department of Justice. The ACC chairman briefed the US diplomats about the context of the creation of the anti-graft watchdog, its pre- and post-operations, the various reform programmes undertaken so far, the laws and regulations related to anti-corruption and prevention. The chairman thanked the US Embassy and the US government for help in training Bangladeshi officials on anti-corruption since 2016.  In the meeting, the chairman hoped that training co-operation will continue in the activities of the newly created Digital Forensic Lab and in increasing the skills of the officers related to it. Read:ACC holds mass hearing against 42 govt agencies Also, the US ambassador told the commission that the 20th international anti-corruption conference to be held from December 6 to December 10 will be attended by representatives of various levels of international anti-corruption organizations from all over the world.  He highlighted the importance of participation in this conference to prevent corruption and requested the commission to participate in it by sending a representative of the Anti-Corruption Commission. He said US government will continue to cooperate with the ACC on the issue of  money laundering. The commission chairman thanked the US for supporting the ACC for building institutional capacity
US pledges more support to Bangladesh’s anti-graft body