US announcement on Rohingya Genocide: Dhaka hopes it helps repatriation

Bangladesh has welcomed US announcement acknowledging Rohingya genocide noting that it might expedite efforts on accountability and repatriation fronts. "Though late, it's a good news. We welcome it," Foreign Minister AK Abdul Momen told reporters at his office while responding to a question.  He said if genocide takes place anywhere it should be acknowledged and the perpetrators should not go unpunished.  Read:UN members urged to acknowledge Rohingya genocide, refer Myanmar to ICC "That's why we say never again. We don't want to see any genocide. Unfortunately, genocide is taking place," said Momen.  Terming the US a good friend of Bangladesh, Momen hoped that will put more pressure on Myanmar so that they take back Rohingyas to their homeland in Rakhine State.  "If the repatriation efforts are expedited through this US announcement, we will be very happy," he said, adding that they are focusing on two goals - welfare of Rohingyas through repatriation and prevent repetition of genocide.  Momen said the victims of genocide must get justice and hoped that the genocide case against Myanmar filed by The Gambia at the International Court of Justice (ICJ) will get momentum.  Matthew Smith, chief executive officer at Fortify Rights, termed US Secretary of State Antony Blinken's announcement "historic" for the Rohingya and all people of Myanmar and also for wider efforts to prevent and remedy genocide. "To prevent genocide, governments must at least acknowledge it when it happens, which is precisely what the US government did today. United Nations member states should publicly acknowledge the Rohingya genocide in Myanmar and ensure that the UN Security Council refers the situation to the International Criminal Court (ICC),” said Fortify Rights Monday. The Argentinian judiciary has taken a step to open a case against the Myanmar military – including Min Aung Hlaing and much of the current junta’s senior leadership – over the genocide against the Rohingyas, Burmese Rohingya Organisation UK (BROUK) has said. The Second Chamber of the Federal Criminal Court in Buenos Aires confirmed on November 26 that it would launch a case against senior Myanmar officials under the principle of universal jurisdiction, which holds that some crimes are so horrific that they can be tried anywhere.  BROUK first petitioned the Argentinian judiciary to open such a case in November 2019. “This is a day of hope not just for us Rohingya but for oppressed people everywhere. The decision in Argentina shows that there is nowhere to hide for those who commit genocide – the world stands firmly united against these abhorrent crimes,” said Tun Khin, President of BROUK. Read: Growing violence in Rohingya camps can spread beyond borders, PM warns ASEM summit The Second Chamber of the Appeal Court reaffirmed in its resolution that “the gravity of the facts and the violation of ius cogens norms permit that those facts are investigated in our country”. “We applaud the Argentinian judiciary for showing the courage and moral leadership to take up this case. Justice for decades of dehumanising and killings of Rohingya in Myanmar is now within reach,” Tun Khin said. “This is not just about accountability for Rohingya, however, but for everyone who has suffered under the Myanmar military’s brutal reign. This includes the thousands killed, injured, tortured or disappeared since the coup in February this year.” The case relates to crimes perpetrated against the Rohingya by Myanmar authorities in Rakhine State for decades. In 2017, the Myanmar military and its proxies launched a vicious campaign in the region, committing the worst atrocities and driving close to 800,000 Rohingya to flee across the border into Bangladesh. The case includes the particular situation of six women who were raped, tortured and in many cases their husbands and children killed during that genocidal campaign in Rakhine State. International justice efforts The case in Argentina is the first universal jurisdiction case concerning the Rohingya genocide anywhere in the world, but not the only international legal process against the Myanmar authorities. Read: Myanmar to take back Rohingyas gradually, hopes Foreign Minister As mentioned above, the ICC in November 2019 approved an investigation into Myanmar for crimes against humanity against the Rohingya. The Gambia in November 2019 launched a case against Myanmar for violating the Genocide Convention with the International Court of Justice (ICJ). In January 2020, the ICJ imposed “provisional measures” on Myanmar as part of the case, essentially a legal injunction ordering the end to genocidal practices against the Rohingya. “There is no question that the Myanmar authorities are feeling the pressure of the many international justice efforts that are under way. The architects of the genocide against the Rohingya can and should soon face a Court of Law. We urge the international community to redouble efforts to bring about justice and ensure that this momentum is not lost,” said Tun Khin.

Amid the changed situation in Myanmar, the next round of discussions on Rohingya repatriation, scheduled to take place virtually on Thursday, looks uncertain. A total of 1,464 Rohingyas on Saturday left for Bhasan Char in the third phase from camps of Cox's Bazar, as part of the government’s initiative to relocate the ethnic group to the island. The authorities concerned are all set to start the third phase of Rohingya relocation to Bhasan Char island from Friday. Bhasan Char: 3,000 Rohingyas to be relocated in 3rd phase

Around 3,000 Rohingyas have agreed to relocate to Bhasan Char from the camps in Ukhiya and Teknaf in Cox’s Bazar.

Bangladesh on Tuesday said there are indications that the new US administration under President Joe Biden will look into the issue of genocide of Rohingyas in the Rakhine State and hopefully will proactively take action for their safe return to Myanmar. 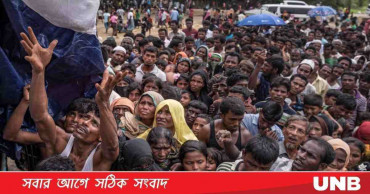 Bangladesh, Myanmar and China will hold a virtual tripartite meeting on Tuesday to discuss ways to expedite the Rohingya repatriation process.

The Gambia v Myanmar: Proceeding on the merits

On October 23, The Gambia filed a more than 500-page Memorial, which also includes more than 5000 pages of supporting material, in its lawsuit against Myanmar at the International Court of Justice in The Hague, making its case for how the Government of Myanmar is responsible for genocide against its own Rohingya population.
‘I can’t forget her'- Myanmar’s soldiers admit atrocities
US announcement on Rohingya Genocide: Dhaka hopes it helps repatriation
Argentinian judiciary to open case against Myanmar military over Rohingya genocide
Rohingya repatriation: Next round talks look uncertain
Another batch of 1,400 Rohingyas relocated to Bhasan Char
3rd phase Rohingya relocation to Bhasan Char starts Friday
Bhasan Char: 3,000 Rohingyas to be relocated in 3rd phase
US hints at looking into Rakhine genocide; safe Rohingya repatriation: FM
Rohingya repatriation: Bangladesh, Myanmar, China tripartite talks Tuesday
The Gambia v Myanmar: Proceeding on the merits