Covid-19 burials: Quantum volunteers working through this lockdown too

The Quantum Foundation, one of the voluntary organizations in the country, is actively involved in the burials of coronavirus victims, even amidst an all-out lockdown across the country. Thousands of Quantum volunteers are working 24 hours a day or night for the burial of the deceased, regardless of religion, said a press release from Quantum Foundation. Despite the lockdown, relentless humanitarian service activities are going on all over the country including the capital. Khandaker Sajibul Islam, who is in charge of Quantum Burial in Kakrail, said, "We were able to bury 20 bodies of coronavirus victim in Dhaka till night on the first day of the nationwide lockdown on July 1." Also read: Covid-19: Bangladesh sees 132 more daily deaths, 8,483 cases Quantum Foundation workers have buried nearly 4,000 bodies since 2020. Quantum has been working for the burials of bodies with coronavirus or corona symptoms since the beginning of Corona in April, 2020. 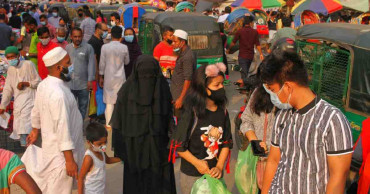 Bangladesh recorded 88 coronavirus-related deaths in the last 24 hours until Friday morning as the country grapples to tackle the second wave of the virus. The health authorities also reported 3,629 new cases, said the Directorate General of Health Services in a handout. The coronavirus death toll now stands at 10,869 with the mortality rate slightly rising to 1.47 percent after staying at 1.46 for the last two days. Meanwhile, the daily infection rate fell to 14 percent from Thursday’s 14.63 percent. Between April 16 and 19, the country recorded over 100 deaths breaking previous daily records. Bangladesh saw 91, 95 and 98 Covid-related deaths on April 20, 21 and 22 respectively. Bangladesh reported its first coronavirus cases on March 8 last year and the first death on the 18th of that month. Also read: Covid-19: Bangladesh sees 98 more deaths, 4014 new infections Health authorities have so far confirmed 739,703 cases. Among them, 647,674 people - 87.56 percent of all patients – have recovered. Bangladesh again broke all previous records of Covid-19 deaths registering 112 fatalities in a 24-hour period until Monday morning.   The country saw over 100 deaths for the fourth consecutive day. The latest fatalities pushed up the death tally to 10,497 with a mortality rate of 1.45 percent, according to a handout from the Directorate General of Health Services. Also read: Covid-19 vaccine not a 'silver bullet': WHO Besides, 4,271 new cases were reported during the period after testing 24,152 samples. The infection rate was 17.68 percent, down from 19.06 percent on Sunday. On Sunday, 19,404 samples were tested. The number was 34,630 on April 7 when the country recorded its highest single-day cases of 7,626. Bangladesh reported its first coronavirus cases on March 8, 2020, and the first death on March 18 that year.

Ekattor TV Associate News Producer Rifat Sultana, who tested positive for Covid-19 a week ago, died at a city hospital Friday evening after suffering a cardiac arrest. The 32-year-old journalist had also been suffering from pregnancy-related complications. Parvez Reza, special correspondent of the private TV channel, confirmed the news to UNB saying: "Rifat's husband and mother-in-law also tested Covid-19 positive." Also read: Ex-law minister Abdul Matin Khasru dies She had to undergo a Caesarean delivery on Thursday and the newborn baby has been kept in another private hospital in the city. The private television channel also shared the news of Rifat's death on its verified Facebook page. Meantime, Bangladesh broke its previous records of single-day death count with 101 fatalities in 24 hours until Friday morning although the number of new cases remained below the 5,000-mark. Also read Covid-19: Bangladesh shatters single-day fatalities record with 101 deaths The death tally now stands at 10,182 with a mortality rate of 1.43%, the Directorate General of Health Services said. Also, the daily infection rate climbed to 23.36% with 4,417 new cases.

India recorded a single day spike of 103,558 COVID-19 cases on Monday, the highest so far, thus taking the total tally to 12,589,067. With 478 deaths since Sunday morning, the death toll stood at 165,101. There are still 741,830 active cases in the country, while 11,682,136 people have been discharged so far from hospitals after medical treatment. Also Read: India records highest spike of daily COVID-19 cases this year There was an increase of 50,233 active cases during the past 24 hours, out of which maximum cases were reported from the southwestern state of Maharashtra. The number of daily active cases has been on the rise over the past few days, as another wave of COVID-19 looms large in India. In January the number of daily cases in the country went down to below-10,000. As many as 9,102 new cases were reported on Jan. 25-26, which was the lowest in the previous 237 days. Prior to that the lowest number of daily new cases were 9,304 registered on June 4, 2020. Also Read: India's COVID-19 tally rises to 11,599,130 with nearly 44,000 new cases . India launched a nationwide vaccination drive on Jan. 16. So far 79,105,163 people have been vaccinated across the country. Meanwhile, the federal government has ramped up COVID-19 testing facilities across the country, as over nearly 249 million tests have been conducted so far. As many as 249,019,657 tests have been conducted till Sunday, out of which 893,749 tests were conducted on Sunday alone, said the latest data issued by the Indian Council of Medical Research (ICMR) on Monday. The national capital Delhi, which has been one of the most COVID-19 affected places in the country, witnessed as many as 4,033 new cases and 21 deaths through Sunday. As many as 11,081 people have died in the city due to COVID-19, confirmed the Delhi health department. Two types of vaccines are being administered to the people in India. Bangladesh saw a fall in Covid-19-related deaths and a rise in new cases in the last 24 hours till Wednesday morning.

A World Health Organization team looking into the origins of the coronavirus pandemic on Sunday visited the food market in the Chinese city of Wuhan that was linked to many early infections.

As COVID-19 surged, retired attorney Susan Crowley did some simple math and discovered a chilling fact: people over 60 made up 91% of coronavirus deaths in Oregon. So the 75-year-old was shocked when the state started vaccinating teachers this week before senior citizens in a push to get children back into classrooms.