A fire broke out at the extended Rohingya camp at Kutupalong in Ukhiya upazila, Cox's Bazar on Sunday, burning at least 20 houses and a health compound, officials said. However, no injuries were reported from the fire. The fire that burned the houses and a health compound, operated by the International Organization for Migration (IOM), started at around 7pm at Camp-20 Extension, said Md Shamsu-Ddouza Nayan, additional refugee relief and repatriation commissioner (deputy secretary). The cause of the fire at Block D of the camp was not immediately known, said Naimul Haque, commander of Armed Police Battalion (APBn-14). "However, no casualties have been reported in the fire so far." At first, Ukhiya fire service rushed to the camp, and later two units of firefighters from Cox's Bazar fire service joined them, Md Abdullah, deputy assistant director of Cox's Bazar fire service, said. A fire started inside the IOM's Severe Acute Respiratory Infections Treatment Centre (SARI ITC) compound today in Cox's Bazar, Tarek Mahmud, national communication officer at IOM Cox's Bazar, said. Also read: Cox’s Bazar Rohingya camp fire guts over 400 houses The IOM hospital staff and patients were evacuated to a safer area, while the organisation's staff and Rohingya volunteers, assigned to the disaster management unit, immediately started to contain the fire. "By around 7:35pm, the fire brigade arrived on the spot and could tame the flames by 8:10pm. One of the three main areas of the compound sustained fire damage. The reason for the fire is unknown," Tarek said. Soon thereafter, IOM's Deputy Chief of Mission arrived from Cox's at the SARI ITC compound with technical staff to assess the situation and liaise with the authorities. The fire damaged one of the three areas in the compound. However, no areas around the compound were damaged.   Early tomorrow, another IOM team will conduct a more thorough damage assessment, said Tarek. Also read: Rohingya camp fire: Death toll climbs to 11 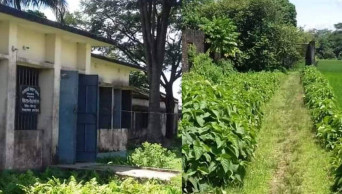