UN Under-Secretary-General for Counterterrorism Vladimir Ivanovich Voronkov has appreciated the good practices of Bangladesh to counter-terrorism and prevent violent extremism. Voronkov invited Bangladesh to share their story of success in the upcoming high-level meeting of the heads of counter-terrorism institutions of the Member States scheduled to take place in June 2023.  Recognizing Bangladesh as an important partner of the United Nations in its efforts to counter global terrorism, the Under-Secretary-General also expressed his readiness to extend necessary cooperation in relevant fields including financing of terrorism, nuclear terrorism, capacity building and technical assistance.  Earlier, Home Minister Asaduzzaman Khan has said the current government of Bangladesh, under the visionary leadership of Prime Minister Sheikh Hasina, maintains a policy of zero-tolerance towards terrorism in its all forms and manifestation. He made the remarks during his bilateral meetings with Gambian Interior Minister Seyaka Sonko and UN Under-Secretary-General for Counterterrorism Voronkov held at the UN headquarters on Wednesday.  The meetings took place on the sidelines of the 3rd UN Chiefs of Police Summit (UNCOPS 2022). Bangladesh’s Home Minister led the delegation accompanied by Inspector General of Police, Dr. Benazir Ahmed and officials of the Public Security Division of the Ministry of Home Affairs, officials from Police Headquarters and Permanent Mission of Bangladesh to the United Nations, said the Bangladesh Mission in the UN on Thursday.  During meeting with Under-Secretary-General (USG) for Counterterrorism, the Home Minister shared the various initiatives and policies undertaken by the government of Bangladesh under the dynamic leadership of Prime Minister Sheikh Hasina and sought cooperation from the office of Counter-terrorism in the areas of mutual interest in future.

The situation in Afghanistan remains fluid and Bangladesh should exercise “extreme caution” especially in regard to countering violent extremism, speakers have said at a discussion With 100 days of the Taliban in power, Afghanistan seems to be on the brink of yet another major humanitarian crisis having implications on regional countries, they said, adding that the ripple effect of the Taliban takeover will be felt all across the region, including Bangladesh. The Taliban took over Afghanistan in mid-August sparked tensions regarding the possible implications regional nations will face, they observed. Read: US spl envoy discusses Afghanistan with top Indian officials The aforementioned sentiments were echoed by Major General ANM Muniruzzaman, President of Bangladesh Institute of Peace and Security Studies (BIPSS) and Zafar Sobhan, Editor of Dhaka Tribune in their opening remarks at the BIPS-Dhaka Tribune Roundtable titled, 'Taliban Takeover in Afghanistan: Regional and International Implications.' The discussion, held in a city hotel on Tuesday, was attended by ambassadors, scholars, security experts, and youth representatives from various disciplines. Muniruzzaman  emphasized the dire situation in Kabul with the ongoing economic meltdown. He said, “The coming winter months are going to be the toughest with a high chance of mass starvation, among other complications.” Zafar Sohban said it had been 100 days since the Taliban took over in Afghanistan, and it was important to take a deeper look at the impact of this situation, including how it may affect Bangladesh. Muniruzzaman discussed how a failed Afghanistan state will bear consequences not just for the region but international security as well. “Therefore, an economically stable Kabul is in the best interest of the region,” he added. When discussing the effect of the takeover for Bangladesh, Muniruzzaman discussed how the Afghan Taliban’s influence is very prominent in the violent extremism in Bangladesh and that the new takeover has inspired a new wave of people in the country, especially the youth. The first keynote speaker, Major General Muhammed Firdaus Mian (retd), former chairman of Bangladesh Institute of International and Strategic Studies (BIISS), laid emphasis on impact on violent extremism and its possible spillovers for the region. 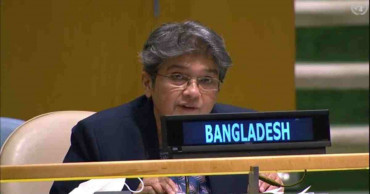 Bangladesh rejects terrorism in all its forms, manifestations: Envoy