Angry mob lynched two robbers to death and left another one critically injured in Cumilla's Muradnagar early Friday, police said. However, the identities of the deceased could not immediately be confirmed. Read more: 2 ‘thieves’ lynched in Narail After the recent series of robberies in Palasuta village and surrounding areas, villagers are keeping a vigil at night to nab the criminals. They caught the three robbers with local weapons as they took refuge at a Palasuta house after robbing villagers in another place of the upazila, Kamruzzaman Talukdar, officer-in-charge (OC) of Muradnagar Police Station, said. After that, the locals surrounded the robbers and started assaulting them, leaving two of them dead and other seriously injured, the OC said. Read more: ‘Robber’ lynched in Chattogram The injured robber is undergoing treatment at Cumilla Medical College Hospital and still not out of the woods. The bodies were sent to the hospital morgue for post-mortem, the OC said. Members of the Rapid Action Battalion (Rab) have launched a special drive to free the world’s largest mangrove forest, Sundarbans, from robbers – to ensure security of fishermen. A special team named “Elite Tigers” of the battalion launched the drive on Saturday noon through a long range patrolling in Sharankhola, Joymoni, Baroitala, Andarmanik, Mrigamari and others spots. The drive will continue while another team, “Bengal Tigers”, with trawlers is kept standby to response to emergency calls. Robbers abducted 11 fishermen from different areas of the Sundarbans between December 13 and 18. Read more: 11 kidnapped fishermen rescued in Sundarbans: Police Last Wednesday, police claimed that the robbers left the fishermen in the face of their drives. Some of the rescued fisherman, however, claimed that they were released after paying ransom to the abductors. Police denied this claim. Commandant Md Badruzzoha, of Rab-6, said they launched the special drive to bring the robbers, who recently kidnapped fishermen, under the law through identification. Read more: Killing tigers in the Sundarbans: Offenders get off scot-free for lack for evidence “We are determined to free the Sundarbans from the criminals at any cost,” Lt Col Mostak Ahmed, commandant of the Rab-6, said. The Rab officer further said that law enforcers will always stand by the fishermen to provide security. Three killed in Noakhali during 'shootout between robbers'

Police in Noakhali's Hatia have reported the deaths of three men in what it described as a "shootout between two gangs of robbers," which erupted over a turf war, in Char Ghasia of Noakhali's Hatia early Thursday. The deceased were identified as Shahraj (35), Kabir (40) and Nurunnabi (45), Hatia Police Station Office-in-Charge Amir Hossain told UNB. Their bodies have been kept at Hatia's Chairman Ghat Police Outpost and will be sent to Noakhali 250 Bed General Hospital for autopsies early Friday, he added. Earlier, Bangladesh Coast Guard claimed to have detained five robbers with arms following the turf battle. The detainees are Md Hinju, 37, of Noakhali's Char Jabbar; Mohammad Harun, 37, of Lakshmipur's Ramgati, Mohammad Liton, 35, from the district's Char Gazi village, Mohammad Mosharof, 36, of Abdul Munshirhat Kalkini village and Azim Bepari, 27, of Char Abdullah village. During its drive, Coast Guard seized three single-shot rifles, two rounds of bullets, six machetes, five spears and many iron rods from them. According to locals, two robbers, who are also brothers, Khokon and Fakhrul were at loggerheads over establishing supremacy in Char Ghasia. Recently, Fakhrul took hold of the area after the law enforcers caught Khokon. Coming out of jail on bail a few days ago, Khokon tried to regain his hold. So, the dispute between the two brothers resurfaced and led to today's gunfight. Lieutenant Shafiul Kinjol, media officer of BCG Hatia, said: "Legal action will be taken against the detainees." 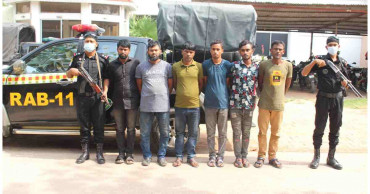 Rab said on Friday they arrested six members of an alleged inter-district robbery gang including its kingpin, while preparing for robbery from Purbobhabnathpur area under Sonargaon upazila. The elite force also recovered a foreign pistol, one round of bullet, one Chinese axe and locally made other sharp weapons from the possession of the arrestees during the drive, said a press release signed by Lieutenant Colonel Tanvir Mahmud Pasha, commandant of the Rab-11. The arrested robbers have been identified as leader Shakawat Hossain Rony, 25 and his accomplices Md Sohail, 32, Md Shahidul Islam, 26, Al Amin, 23, Md Ismail, 38, and Sujoy Dey, 30. Acting on a tip-off, a team of the Rab-11 conducted a drive and arrested the men, said the press release  In the preliminary interrogation, the men confessed to committing robberies at two places of Araihazar upazila in the district on April 6 and 24 this year. Ringleader Rony admitted that he used to introduce himself as grandmaster of Kachpur’s “Bandhu Dance Academy” and staged dance on several functions including weddings and birthdays, and develop a close relationship with rich people taking advantage as a performer, the press release said. Read: Robbery & rape in Tangail moving bus: Mastermind among 10 held Later, the kingpin and his cohorts committed robbery at their targeted houses holding people hostage at gun point. Moreover, the men have been involved in robberies in Dhaka, Narayanganj, Gopalganj and adjoining districts for long, targeting houses of expatriates and rich people, it claimed.   A case related to the incident was filed against the men at the local police station, the release added.

Seven armed men posing as passengers allegedly hijacked a Chattogram-bound bus in Tangail, robbed commuters of cash and belongings, and raped a 25-year-old woman at gunpoint. The spine-chilling crime occurred in the Raktipara area of Tangail's Madhupur upazila off the Dhaka-Tangail Highway in the early hours of Wednesday, police said. Sarkar Md Kaisar, superintendent of Tangail Police, said the bus of ‘Eagle Paribahan’, with 24 passengers on board, was on its way to Chattogram from Kushtia late on Tuesday night when the crime occurred. Three of the seven robbers boarded the bus around 11pm on Tuesday after it resumed its journey following a stopover at a hotel in Sirajganj district. And some 5-10 minutes later, four more got into the bus, police said. Read:Rape attempt on woman on moving bus: Driver, helper held "Around 12am on Wednesday, when the bus took the busy Dhaka-Tangail Highway in the Natiapara area, the robbers whiffed out guns, hijacked the vehicle and forced the driver to drive towards Madhupur upazila," the SP said. On a desolate stretch, the armed gang robbed the commuters of cash, jewellery and mobile phones. "The robbers then blindfolded the passengers and raped the woman commuter on board," the SP said. The passengers' ordeal continued for over three hours till the seven criminals forced them to get off the bus and drove the heavy vehicle towards Raktipara's Jam-e-Mosque, where they abandoned it and fled with the booty, police said. “Detectives are investigating the crime and all the robbers will be arrested soon,” said SP Kaiser. "The woman is being treated at Tangail General Hospital, and her medical test is slated for Wednesday."

Two Rab members among 3 thrashed by locals in Ctg

Three people, including two Rapid Action Battalion (Rab) personnel, were badly beaten up by locals in Mirsarai upazila on Wednesday night after being mistaken as robbers, officials said. The injured Rab men have been identified as Kausar, 29, and Mokhles Uddin, 33. The other victim has been identified as Rab informer Pervez, 28. Also read: Lalmonirhat lynching: 38 surrender, sent to judicial custody The two Rab members were brought to Dhaka for better treatment by a helicopter around 9.30pm, said Rab's senior assistant director (media) Nurul Absar Chowdhury. The trio went to Baroiyarhat Municipality Bazar in a car around 8.45pm to gather information about drugs-business in the area, the Rab said in a release. Also read: Three robbers lynched in Manikganj, two die Suspecting them as robbers, local people thrashed them, leaving the three injured. On information, a team of Rab-7 rushed to the spot and rescued them.

Sleuths of Gazipur Metropolitan Police's detective branch on Wednesday claimed to have busted a gang of robbers, with the arrest of its six members late on Tuesday night. The arrestees have been identified as Minarul Islam Sujan (24), Idris Mia (40), Razu alias Sohel (22), Hridoy Hossain (20), Sujan Rana (19), and Mehedi Hasan Apu (21). Also read: Sabujbagh housewife murder: AC repair team-turned-murderous robbers arrested Jakir Hasan, deputy commissioner of Gazipur Metropolitan Police, said, that acting on a tip-off, the detectives conducted a special drive at Chandona Chowrasta and nabbed them "as they were planning to commit a robbery in the area". Lethal weapons have been seized from the possession of the accused, he said. "Legal action will be taken against the arrestees," the police officer added. Detective branch of Dhaka Metropolitan Police (DMP) arrested eight suspected robbers from the city’s Mohammadpur area, including the ringleader of the metropolitan and inter-district robber gang, said a press release on Monday. The arrestees are Md. Mozammel Hossain Apple, Haji Md. Jahangir Alam, Md. Jamir Khan, Md. Mujibur Rahman Majid Moktar, Md. Masum Gazi, Shafiqul Kharadi, Md. Quddus Ali and Md. Kauchar Mia. Read: 5 held with 18,600 Yaba pills in city The detectives also recovered a microbus used for robbery, a gun, a wireless set, one handcuff, 2 fake DB jackets and four sharp weapons from their possessions, the release added.Tipped-off, a team of DB (Tejgaon division) conducted a drive in Bosila area of c Mohammadpur on Sunday night and arrested them along with arms and other equipment.According to the press release, the gang carried out several robberies in the last few months across the country.Several retired and suspended members of various law enforcement and military forces were involved in the ring, it added. Dhaka Metropolitan Police on Saturday claimed to have arrested seven men for robbing two Indian nationals studying medicine in the capital. The arrestees have been identified as Md Fakhrul Islam Foku, Md Almas, Md Samun, Md Abdullah Al Yusuf Ahmed Asik, Md Shahin, Md Babu and Md Shafiqul Islam. The seven were arrested from different parts of the city and Keraniganj during raids on Friday, officials said. A private car, two machetes, a laptop, 19 mobile phones and some cash were found in their possession. READ: Trucker held over death of van puller in city On January 23, Shahil Ahmed and Asif Iqbal, the two students of Dr Sirajul Medical College Hospital in Dhaka, were leaving for India on a two-week vacation.  Around 5am, on their way to the airport, the two were stopped by masked robbers in front of the Grameen Check showroom in the Magbazar Wireless area and robbed of their belongings, including a trolley bag, a handbag, a laptop, two mobile phones, Indian rupees 57,000 and Tk 7,600 in cash. READ: Biman guard, passenger held with gold worth Tk2.25 crore at Dhaka airport Following their complaint, an FIR was filed at Ramna Model Police Station on the same day. The arrestees were wanted in several cases lodged at different police stations of the capital, the DMP said in a release.