Water transport workers continued their countrywide strike for the second consecutive day – to press home their 10-point demand, including wage hike. The workers held demonstrations at Khulna launch terminal this morning, reports our Khulna correspondent. Read more: Countrywide water transport strike: Unloading at Ctg port halted Passengers are, as always, suffering as all launches from Khulna to the southern part (Dakop, Paikgachha, Koira, Satkhira) have been halted. Cargo launch services also remained suspended. At present, a worker is getting a minimum wage of Tk 7,750 monthly when prices of essentials have shot up abnormally, said member of Khulna Noujan Sramik Sangram Parishad Farooq Hossain. He said they have been repeatedly demanding increase in wages but water transport owners did not pay any heed. Read more: Passengers suffer as Barishal water transport workers go on indefinite strike The workers will continue their strike, abstaining from work until their demands are met, said Khulna Divisional Organising Secretary of Bangladesh Launch Workers’ Association, Delwar Hossain. On November 19, Noujan Sramik Sangram Parishad announced to go on an indefinite strike across the country from November 26 midnight to press home their 10-point demand, including setting their minimum wage at Tk 20,000. Other demands of the workers are providing appointment letter, identity card and service book to workers, formation of Contributory Provident Fund and Seafarer Welfare Fund to provide food and sea allowances, providing Tk 10 lakh compensation for accident and death at work. People infected with conjunctivitis asked to refrain from travelling: HSIA

The authorities concerned of Hazrat Shahjalal International Airport (HSIA) on Tuesday requested people suffering from conjunctivitis not to travel within seven days of being infected with the disease. In case of any emergency, it also asked the passengers suffering from the disease to go to the airport with a prescription of a registered physician and wearing sunglasses for travelling, said a press release issued by Executive Director Quamrul Islam of the airport. It also asked the passengers suffering from conjunctivitis to be checked by a health officer of the Health Department at the airport and he will provide a fitness certificate after scrutinising the documents in case of any emergency. The airport authorities issued the notice after observing the presence of people infected with conjunctivitis outside the airport for safety reasons. Launch owners have decreased the number of vessels plying the Dhaka-Barishal route due to shortage of passengers and price hike of fuel. Three launches ply the Dhaka-Barishal-Dhaka route each day, the MV Manami’s Director Ahmed Jaki Anupam said after a meeting of launch owners of the Bangladesh Inland Waterways Association in the capital on Tuesday. A total of 18 launches have been categorized into six groups to operate on the route per day, he said. Director Anupam informed that the Barishal-bound launch from Dhaka will reach around 5am after departing around 8pm. On the other hand the Dhaka-bound launch from Barishal will also leave at 6am and arrive around 8pm on the same day.   Read: Upto 30 launch services from Sadarghat forced to fold post-Padma Bridge He further said decision to stop overtaking among launches was taken at the meeting. All the decisions taken at the meeting will be implemented within four to five days. Mahbub Uddin Ahmed Bir Bikram presided over the meeting where its Vice President Bodiuzzaman Badal, Managing Committee’s Convenor of Dhaka Rivers Ports Water Traffic Plying Mamun-Or-Rashid and launch owners were present. Passengers suffers as buses on Sylhet-M’singh route stay off

Commuters have been suffering a lot for the past 13 days as the bus workers on the Sylhet-M’singh went on an indefinite strike from August 1 following a conflict between the authorities concerned of the two routes. Bus movement on the Sylhet-Mymensingh route remains suspended since August 1, causing immense sufferings to the Sylhet, Mymensingh, Netrakona and Kishoreganj-bound passengers. Some 4-5 buses were operative on Sylhet route and 60-70 buses were operative on Mymensingh route. The Mymensingh Bus Owners Association obstructed the Sylhet Bus owners to move in Sylhet, said Ziaul Kabir Palash, general secretary of Sylhet District bus Owners Association. Read: Commuters suffer as buses stay off roads As a result, no buses were left from the terminal from August 1.The commuters failed to buy tickets for Mymensingh as they went on the strike without any prior notice. However, a meeting will be held on Sunday where the two groups of bus owners association will take final decision. The meeting was scheduled to be held at ‘Madhabpur Highway Inn’. Due to traffic gridlock caused by an ongoing Bangladesh Road Transport Authority (BRTA) project, police have requested Hazrat Shahjalal International Airport-bound passengers to leave their homes early so that they can arrive on time. Traffic (Uttara Division) of Dhaka Metropolitan Police (DMP) urged the passengers to do so as the work of the project has narrowed the road to the airport. Read: Salman dissatisfied with services at airport DMP Joint Commissioner (Traffic North) Abu Saleh Md Raihan said vehicle movement has been suspended in three lanes of the road, leading to heavy congestion. "So, airport-bound passengers need to set out ahead of time." "As the road has been separated into two, passengers need to stick to the left lane after passing Le Méridien Dhaka and Kawla. Those travelling from Khilkhet to Uttara or to Gazipur need to head out early," he added.

The hike in fuel prices by the government on Friday has resulted in an acute transport crisis in Dhaka, causing untold sufferings to commuters as a large number of buses stayed off the roads on Saturday morning. In an abrupt move, the government increased the prices of diesel, octane and petrol by 42.5 percent, 51.7 percent and 51 percent respectively Friday night. Currently, diesel is being sold at Tk 114 per litre, octane at Tk 135 per litre and petrol at Tk 130 per litre. Transport owners decided not to operate buses following the government’s announcement, triggering transport shortage in the capital. Also read: Brace for bus & ferry fare hike Masuma Nasrin Rimi, a private employee working at a multinational company at Gulshan-1, waited in front of Purobi Bus Stand in Mirpur-12 for two hours but couldn’t catch a bus. She had to share a CNG-run auto-rickshaw with another office goer to reach Mohakhali Wireless Gate area.

At least 30 passengers killed in road accident in Kenya

At least 30 passengers were killed and several others injured on Sunday evening when their bus fell off a bridge and plunged into a river along the highway in Tharaka Nithi, Kenya, local police said. The bus, traveling from Meru town to the coastal city of Mombasa, plunged into the Nithi River about 40 meters below along the Meru-Nairobi highway at around 6:40 p.m. (1540 GMT), Eastern Regional Police Commander Rono Bunei said on Monday. Bunei said the bus must have developed brake failure because it was at a very high speed when the accident happened. Also read: 22 killed in Egypt traffic accident The wreckage of the bus could be seen strewn on the hillside near the black spot. Alex Mugambi, Tharaka Nithi County Rescue team manager, said the death toll may rise. The accident is among a series of deadly crashes in the country. On July 8, more than 20 passengers were killed in an accident along the Nairobi-Mombasa highway. Also read: 13 killed in India bus accident

As many as 158 passengers who boarded a Dhaka-bound flight of Biman Bangladesh Airlines from Kolkata on Monday night, had a traumatic experience for nearly four hours with no air-conditioning and inadequate food supplies. The flight was scheduled to take off for Dhaka from Netaji Subhash Chandra Bose International Airport in Kolkata around 9.05 pm on Monday and the passengers got on the aircraft some 45 minutes ahead of the scheduled departure. However, the flight could not take off due to a problem with the landing gear, Tahera Khandaker, general manager for public relations at Biman Bangladesh Airlines, told UNB on Tuesday. Read: Three Biman officials suspended over plane collision incident "As per Biman's safety regulations, power has to be cut off while fixing any technical problem. That was why the air-conditioning system of the aircraft had to be switched off and several passengers on board felt uneasiness," she said. "Besides, the passengers were not allowed to exit the aircraft as per Kolkata airport rules," Tahera explained. It took engineers around three hours to fix the technical glitch, following which the flight took off and reached Hazrat Shahjalal International Airport in Dhaka around 1.42 am (local time) on Tuesday, said the official. 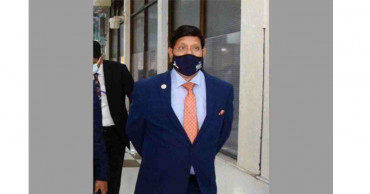 Take measures to alleviate the suffering of Biman passengers

Foreign Minister Dr AK Abdul Momen on Sunday urged the authority of Hazrat Shahjalal International Airport (HSIA) to take effective measures to alleviate the suffering of the passengers by speeding up luggage handling. The foreign minister made the remarks on his arrival at Hazrat Shahjalal International Airport after an official tour from Portugal, a Foreign Ministry press release said. He said “The expatriate Bangladeshis have been contributing to the country’s economy by their hard-earning remittance, it is unfortunate but true that they have to wait hours to get their luggage upon their arrival at the airport”. "It is really painful for them". After arriving at the airport, the minister went to the luggage belts and found that passengers were waiting there for nearly two hours to get their baggage. Later, Momen spoke to the passengers waiting in the luggage belt area of the airport and listened to their complaints. Afterward, he called the director of HSIA and asked him to take prompt steps to reduce luggage handling time. Read: Malta to send team for hassle-free visa processing of 3000 Bangladeshis: FM The expatriate Bangladeshis have already started getting results of the services that the foreign ministry has taken a number of measures to improve consular services at the Bangladesh missions abroad, he added. Similarly, he said measures should be taken to ease the burden on expatriate Bangladeshis at the country's international airports". He assured the passengers present that the airport authorities have been informed to alleviate the suffering of the passengers and hoped that the authorities would take steps to ease the suffering soon. Later, he made a phone call to State Minister for Aviation and Tourism M Mahbub Ali while the junior minister assured him to take steps for further improvement at the airport services.   Finally, Momen thanked the state minister for easing the luggage scanning system at Dhaka airport.

Hundreds of passengers, including children and women, were caught in a long queue of vehicles on the Dhaka-Mawa-Bhanga expressway on the first day of toll collection due to shortage of toll booths. The authority started collecting tolls from vehicles on the Father of the Nation Bangabandhu Sheikh Mujibur Rahman since Friday (1 July) midnight. Read: South Korean firm to collect toll from Dhaka-Mawa Expressway for 5 years During the morning hours many vehicles were seen passing very slowly through the Bogail toll plaza. Only four booths opened to collect tolls at the Bogail toll plaza instead of ten booths, said Faruk Hossain, who is in-charge of toll plaza. As a result, vehicles are taking more time to cross the toll plaza, causing traffic jam, he added.
Day 2 of water transport workers’ strike: Passengers bear the brunt as always
People infected with conjunctivitis asked to refrain from travelling: HSIA
Shortage of passengers, fuel price hike lead to decrease in vessels plying Dhaka-Barishal route
Passengers suffers as buses on Sylhet-M’singh route stay off
Traffic gridlock: DMP requests passengers to arrive at Dhaka airport early
Fuel price hike: Passengers suffer as buses go off roads in capital
At least 30 passengers killed in road accident in Kenya
158 passengers stranded on powerless Biman flight at Kolkata airport
Take measures to alleviate the suffering of Biman passengers
Mawa-Bhanga expressway witnesses huge traffic snarl on first day of toll collection BNP yet to decide venue for Dec 10 rally
Nayapaltan clash: 445 BNP activists including Rizvi, Annie sent to jail, 2 get bail
Officials predict more arrests over German far-right plot
US concerned about reports of intimidation, political violence in Dhaka
No rally to be allowed on streets: Home Minister