Mohiuddin Roni alleges attack on him at Kamalapur station

Dhaka University student Mohiuddin Roni and his fellow protesters on Thursday alleged that they had been attacked at Kamalapur railway station by some law enforcement people. "When we tried to enter Kamalapur Railway station to stage our regular protest, they stopped and attacked us. It is a clear violation of civil rights," Rony told UNB. A female protester named Munni said, "When we were entering Kamalapur Railway station for protest, some Railway police and local law enforcement personnel prevented us. They hurt us by pushing us with their batons." The incident took place around 5 pm on Thursday. Another eye witness has given the same account of the incident. Then the protesters came to Shahbag around 7 pm and squatted there demanding the implementation of his six-point demand along with the proper justice for such harassment. Earlier on July 19, Roni submitted a memorandum to the director general of Bangladesh Railway to press for his six-point  demand and gave an ultimatum of 48 hours. Before this, from July 8, he has been demanding the implementation of his six-point denane after being deceived by SOHOZ.com while buying a train ticket to go home during the vacation of Eid-Ul-Azha. However, when he alleged this deception to Vokta Odhikar Songrokkhon Parishad, they investigated it and fined SOHOZ.com an amount of TK. Two lakh of which Roni was given Tk50000 on July 20. Lone rail protestor forced to call off program at Kamalapur

The Dhaka University student who was conducting a one-man protest against corruption in the country's rail administration, has been forced to come off his daily program at Kamalapur Station. Instead he has submitted a memorandum containing his demands and grievances to the director general of Bangladesh Railway. Mohiuddin Rony, a 4th year student of Dhaka University's Theatre and Performance Studies Department, has been protesting alleged mismanagement and corruption at Bangladesh Railway since before Eid ul Azha, after falling victim to the dodgy e-ticketing system. Rony, who has cut a lonely figure through his protest despite plenty of people agreeing with his views and offering support through other means except standing by him, told journalists how the authorities were slowly making it impossible for him to carry on.     Read: Parliamentary watchdog switches off ACs and lights during meeting to save electricity "Kamalapur Station authority stopped me from entering the station territory yesterday, and today when I went to submit my memorandum to the director general of Bangladesh Railway (at Rail Bhaban), Ansar-police tried to block me from entering the building," Roni said.  He had been showing up at the station since July 8, with a 6-point charter of demands to reform the railway system. There  is no doubt he would be viewed as an irritant, whether in Kamalapur or Rail Bhaban, especially since the fraudulent e-ticketing system had already been uncovered by the authorities, and steps were underway to completely replace it.  His demands are to stop passenger harassment by e-ticketing platform SOHOZ.com, to prevent the black market chain of ticket selling, to stop the online booking system altogether and facilitate an easier, more transparent way to buy any type of ticket for the masses, to increase the number of trains to meet demand, and finally to form strong monitoring cell that truly ensures quality service on behalf of BR, right down to the price of goods like water, food etc... in the train. Roni styled his trek to Rail Bhaban from Kamalapur station today as a 'Long March'.  Contacted, he said, "During this protest I have faced  many challenges and threats to stop this protest but I want to see it through to the end." He also asserts that by imposing a ban on him so that he cannot enter the premises anymore, Kamalapur Station has clearly violated his civic right - a point on which he is probably on much firmer ground. He also said he is forced to hide his present location for 'security reasons'.  "Till now no one has assured me on my claims," he added when asked about his demands.

The railways offering a cheaper and safer alternative is the preferred mode of transportation for the people. But public transportation has remained suspended since a lockdown was enforced earlier this month. Kamalapur Railway Station, which usually teems with life, has fallen silent. With the extended lockdown, passenger train services will remain suspended until April 28, as part of the government’s measures to curb the transmission of coronavirus. Also read: Lockdown: Pvt cars rise on Dhaka roads In the last 24 hours until Thursday morning, the country recorded 98 deaths and 4,014 new infections pushing the total number of cases to 736,074, said the Directorate General of Health Services. Also read: Covid-19: Bangladesh sees 98 more deaths, 4014 new infections An UNB photographer captured photos of an empty and eerie Kamalapur Railway Station wearing a dejected look. 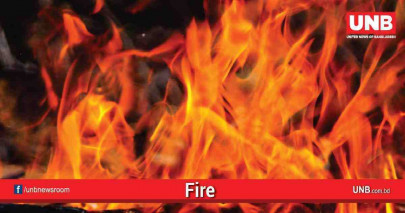