Gymnasium to be built in every ward: DSCC Mayor Taposh

Dhaka South City Corporation (DSCC) Mayor Barrister Sheikh Fazle Noor Taposh on Tuesday said that a gymnasium will be built in every ward under the DSCC. He came up with the announcement while addressing at the 17th board meeting ‘Governing policy-2022 of gymnasiums under Dhaka City Corporation’ of the second council of the corporation at Mayor Mohammad Hanif auditorium in the organisation’s main office. Mayor Tapos said “We have only 17 physical exercise centers in 75 wards; we want to keep a physical exercise center along with a social programme center at every ward.” “We want to build 36 more social programme centers along with the existing 35 ones—for that we also want to keep gymnasiums at every ward,” he said, adding that they have chalked out a project to ensure gymnasiums for the people. “As part of our welfare and social development works, we will renovate the dilapidated gymnasiums being run in assistance with our ward councilors,” he said. The project aims at keeping the youth generation engaged in physical exercise at the gymnasium so that they can’t be derailed, Taposh said, adding they have no intention to bag more revenue from the gyms. Read more: Taposh takes over as new DSCC Mayor The rent for the gymnasiums will be set following areas and its socioeconomic condition, he said adding a Tk 100 will be fixed against every square feet space in the commercial area. Mayor Taposh said the gymnasiums will be categorized into Ka, Kha and Ga considering existing spaces, facilities and gears. Councilors and officials of several departments of the corporation were present at the meeting. Read more: Dhaka mayors get minister status Dhaka South City Corporation's eviction drive at Nilkhet roadside market has been extended for two more days till Wednesday. Mohammad Maniruzzaman, executive magistrate and property officer of DSCC, said the ongoing drive at Nilkhet Cotton Market in the city is going on and the drive will continue till Wednesday as the authorities concerned have decided to extend it for two more days. Read: DSCC evicts 188 illegal shops in Nilkhet Russel Sabrin, chief property officer of the Dhaka South City Corporation, also visited the spot. Dhaka South City Corporation (DSCC) conducted a mobile court drive to evict a total of 188 illegal shops from its three-storied Roadside market or Tula Market in the capital’s Nilkhet area on Sunday. The drive was led by Md Muniruzzaman, Estate Officer and Executive Magistrate of DSCC. During the drive, only 35 shops on the first floor of the market were found to be legal. Thirty-eight shops on the first floor were extended illegally, while 75 shops on the second floor and another 75 shops on the third floor were being run without permission. “A vested group had built these shops illegally without taking any approval from us. All of these shops excluding the 35 legal ones on the first floor will be taken down. The drive will continue until it’s done,” said Muniruzzaman. Read: DSCC to launch special five-day anti-dengue drive Sunday in five wards The drive was supervised by DSCC’s Chief Estate Officer Rasel Sabrin and will resume on Monday. The open waste in Dhaka city has been reduced to 30 per cent from 90 per cent in the last two years, said Dhaka South City Corporation (DSCC) Mayor Sheikh Fazle Noor Taposh on Wednesday. "Earlier in Dhaka city, 90 percent of the waste was found in scattered in places. Now it has been reduced to just 30 percent,” said the mayor while talking to reporters after inaugurating the Secondary Transfer Station in the city’s Khilgaon area. Read: Deal signed to set up waste-based power plant in Narayanganj Besides, work is underway to construct the remaining Secondary Transfer Stations (STS) to ease waste collection, he added. DSCC constructed 35 STS in the last two years, said Taposh. Marking the 76th birthday of Prime Minister Sheikh Hasina, Taposh wished her a long and healthy life. Read: E-waste management should be safe and environmentally friendly: Nasrul Hamid “Bangladesh has come a long way today, we wish that we can build a better Bangladesh holding the hands of PM Hasina," he added. To free footpaths for pedestrians, Dhaka South City Corporation (DSCC) conducted an eviction drive from Gulistan Zero Point through Bangabandhu Avenue to Ahad Police Box today (September 11, 2022). The eviction drive started at 11 am and continued till 3 pm — led by Md Moniruzzaman, estate officer of DSCC. During the drive, nine people were fined Tk 70,000 for illegally occupying roads and footpaths. The fines were collected under subsections 7 and 8 of section 92 of Local Government (City Corporation) Act 2009, said DSCC. Read: Hawkers protest DSCC eviction drive in Gulistan DSCC official Md Moniruzzaman said DSCC Mayor has declared the area a “red zone” — off limits for hawkers, as traffic through Mayor Hanif flyover has increased since the opening of Padma Bridge. The eviction drive was conducted following the announcement, after campaigning for the last three days in the area, he said.   Earlier a five-member committee was formed Sunday to mark the roads, walkways under DSCC as red, yellow and green zones. 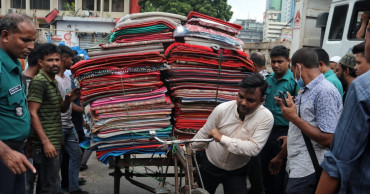 Dhaka South City Corporation (DSCC) authority today (September 11, 2022) conducted a drive to evict hawkers from the city’s important roads. On September 7, DSCC Mayor Sheikh Fazle Noor Taposh said that no hawkers will be allowed on important roads – marked “red” – under DSCC from this week. Read No hawkers on important South Dhaka roads from next week: Taposh

No hawkers on important South Dhaka roads from next week: Taposh

No hawkers will be allowed on important roads, to be marked “red”, under Dhaka South City Corporation (DSCC) from next week, Mayor Sheikh Fazle Noor Taposh said today (September 7, 2022). The DSCC mayor said this after laying the foundation stone of the 10-storey Bangabandhu Avenue Biponi Bitan in the city. “Hawkers will be rehabilitated at the market. We will identify the most important roads under Dhaka South City Corporation and mark them ‘red’ from next week. The drive to evict hawkers from ‘red marked’ roads will start from next week,” he said. Read:Closing timings of hospital pharmacies to be revised: Taposh The construction work of the 10-storey market will be completed within two years and the hawkers will be able to start their businesses at the market, he said. Asked about the dengue menace, the DSCC Mayor said, “We have taken necessary steps in advance to prevent the outbreak of the mosquito-borne disease and we have started combing operations to tackle dengue.” Read: Bus service on 3 routes under route rationalization prog to be launched on Sept 1: Taposh Saying dengue is under control in DSCC, Taposh said according to the report of the health authorities concerned, the number of dengue patients is 40 under DSCC, which is the highest number this year. Besides, two people died from dengue in DSCC this year. He also blamed climate change for the increasing number of dengue patients.

Closing timings of hospital pharmacies to be revised: Taposh

The order to shutter hospital pharmacies by 2am may be reviewed and reconsidered following the requirements of the hospital authorities, said Dhaka South City Corporation (DSCC) Mayor Sheikh Fazle Noor Taposh on Wednesday. DSCC authorities earlier ordered the hospital pharmacies to shut by 2 am considering the emergencies at the hospitals, which is rational, he told the reporters after inaugurating the city's Azimpur Foot over Bridge. The move came as part of government’s austerity measures that include rationing of electricity amid fuel crisis. However, the DSCC will consider extending the closing time of the hospital pharmacies or keeping those open for 24 hours a day following a written request from the busiest hospitals including Dhaka Medical College and Hospital (DMCH), said the mayor. “This will be fixed as per the necessities of those hospitals and the areas,” he added. “But no one can proceed (conduct activities) beyond the schedule in any manner. Everyone has to follow the schedule." Read: Pharmacies in Dhaka to remain open all day: Health Minister Regarding the monitoring of the shops’ scheduled closure, Taposh said no law or policy can be strictly implemented or enforced without public involvement. So this schedule will not be difficult to implement as the public accepted this spontaneously, he added. On August 22, DSCC issued a notice allowing standalone pharmacies to remain open till 12am and those at hospitals till 2am to ration electricity. Besides, the corporation asked malls, shops, kitchen markets and other business outlets in its areas to remain open till 8pm and restaurants and hotels till 10 pm. This order will be effective September 1. On August 25, Health Minister Zahid Maleque said that the pharmacies in Dhaka will remain open 24 hours a day. “We do not give any instructions regarding the closure of the pharmacies by midnight. We are in talks with the city corporations on this. Anyway, pharmacies can remain open for 24 hours,” he added.

Pharmacies in Dhaka to remain open all day: Health Minister

Pharmacies in Dhaka will remain open 24 hours a day, Health Minister Zahid Maleque has said. “We do not give any instructions regarding the closure of the pharmacies by midnight. We are in talks with the city corporations on this. Anyway, pharmacies can remain open for 24 hours,” he told reporters, after a meeting at the Secretariat on Thursday. Read:Hotels, restaurants to close by 10 pm: DSCC Earlier on August 22, Dhaka South City Corporation (DSCC) issued a notice allowing standalone pharmacies to remain open till 12am and those at hospitals till 2am to ration electricity. Besides, the corporation asked malls, shops, kitchen markets and other business outlets in its areas to remain open till 8pm and restaurants and hotels till 10 pm. This order will be effective September 1.
Gymnasium to be built in every ward: DSCC Mayor Taposh
DSCC eviction drive in Nilkhet extended till Wed
DSCC evicts 188 illegal shops in Nilkhet
Open waste reduced to 30% from 90% in DSCC: Taposh
DSCC runs eviction drive to free Gulistan footpaths
Hawkers protest DSCC eviction drive in Gulistan
No hawkers on important South Dhaka roads from next week: Taposh
Nagar Paribahan buses to ply two new routes from Oct 13
Closing timings of hospital pharmacies to be revised: Taposh
Pharmacies in Dhaka to remain open all day: Health Minister