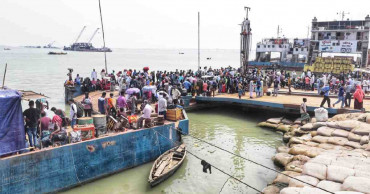 No ferries to ply Shimulia-Banglabazar route at night

Launch and ferry services on Shimulia-Banglabazar route will not ply at night time due to increasing strong current and high tide in Padma, authorities said Monday night. According to the announcement, the night services were suspended until further notice. However, the services will be open during the day time. READ: Ferry with heavy vehicles banned from plying under Padma bridge: Khalid  BIWTC joint-general manager Ahmed Ali said, “The tides are getting high which is why ferry service remain closed at night for the time being.” During the day, the ferry to Shimulia will run through the 12th and 13th pillars of the Padma Bridge. The Banglabazar-bound ferry will move through the 6th and 7th pillars, he said. During the day, a limited number of vehicles cross on the five available ferries. So, he requested the emergency vehicles to use alternative routes. After the announcement services were suspended around 6 pm Monday. Shimulia River Port Naval Safety and Traffic Management Assistant Director Shahadat Hossain said that according to the decision of the concerned committee, the ferry movements will remain closed from 6:30 pm to avoid accidents due to strong currents in the river. The decision was taken for the safety of passengers, launches and staff.   READ: Ferry services on Shimulia-Banglabazar route suspended for bad weather The new schedule would be implemented from Tuesday, he said.
No ferries to ply Shimulia-Banglabazar route at night