Man arrested for raping minor girl after abduction in Ctg

Police arrested a man on Sunday night for the abduction and rape of a minor girl at Lohagara upazila in Chattogram. The arrestee was identified as Jobair, 26, son of Kaykobad Chowdhury from Adhunagar Chowdhury Para area in the upazila. Police arrested Jobair from Khan Hat railway station after the rape survivor’s family filed a case with police, Md Atiqur Rahman, Officer-in-Charge of Lohagara police station. Read more: Man detained in horrific rape-and-burn case of mute woman According to the case complaint, accused Jobair used to tease the girl often on her way to the madrasah and on November 29, he and his two or three associates abducted her. Jobair allegedly raped the girl several times in a cottage and left the girl at Adhunagar bus stand area on December 2. The arrestee has been produced before court today and the girl is being given treatment at one stop emergency service center at Chattogram Medical College and Hospital. Lighter vessel workers in Chattogram launched an indefinite strike from 6 am Friday refraining from transferring goods from moored ships to press home their five-point demands. Transportation of goods from Chittagong port to other parts of the country remained suspended too due to the strike. On Thursday the lighter vessel workers announced the work stoppage during a rally under the banner of ‘vessel workers of all levels,’ at the city's Banglabazar area. Removal of Chattogram Port chairman, removal of Officer-in-Charge of Patenga police station, cancelling lease of Charpara terminal used for movement of lighter vessel workers, creating a safe harbour for lighter vessels by excavating the Sangu River estuary, are among their five-point demands. Read more: With transport strike in mind, BNP activists reach Faridpur days before rally On November 3, men of some leaseholders of Charpara terminal had beaten up some nine workers and the police didn’t take any action against it, said Jashim Uddin, acting general secretary of Lighter Vessel Workers Union. Protesting the incident, workers moved all the lighter vessels to Parkir Char and started using the Chinese Ghat to get on and off the vessels but the authorities evicted that terminal too, he said. Until the demands are fulfilled freight operation from Chattogram through rivers will remain suspended, he said. Read more: Goods transport owners-workers go on 48-hour strike in Sylhet 2 boys tied to pole and tortured by cops in Ctg

Chattogram Metropolitan Police (CMP) has withdrawn three police constables in Lalkhan Bazar area of ​​Chattogram city, after a video of two children being abused by the cops went viral on social media. The withdrawn police constables are Md Mehedi, Md Mazhar, and Md Ahsan. They were attached to CMP's Mansurabad Police Lines, said Md Shahadat Hussain, additional deputy commissioner (Media) of CMP. "A probe committee was formed and action will be taken after investigation," the police official added. The incident took place on Friday noon and the video went viral on Sunday. Read: Death in custody: Family fail to receive Sumon’s body as police attach condition In the video, it was seen that two 13-year- old boys were tied to a pole and physically abused and at one point one of the boys had his head shaved by the policemen. The victims use to live with their parents in Motijharna area of Lalkhan Bazar. Among them, one is a student of class seven. Locals said, thefts occur occasionally in Lalkhan Bazar Magistrate Colony, Motijharna and its surrounding areas. On Friday, police were patrolling the area and they came to know that three children including the two victims were chitchatting near Lalkhan Bazar Government Primary School. Later, the three constables chased the children and detained two of them and took them nearby Jilapi Pahar. They were tied to an iron pole and one's head was shaved off. When contacted, Santosh Kumar Chakma, officer-in-charge (OC) of Khulshi Police Station said he was on vacation that day so he is not aware of the incident.

A speeding express train rammed into a microbus at a level crossing at Mirsharai upazila on Friday, killing at least 11 people who were returning from a visit to a popular waterfall in the hills of the area, police and fire service said. The dead were all travelling by the microbus. Eleven of them died at the scene, while six others were injured, police and fire service said. Nine of the deceased were identified as ‘R&J’ coaching centre teachers Wahidul Alam Jisan, Sajeeb, Rakib and Redwan; and SSC candidates of KS Najumia High School Hisham, Ayat, Maruf, Tasfir and Hasan. The six injured are - microbus helper Taukid Ibn Shawon, 20, and students Md Mahim, 18, Tanveer Hasan Hriday, 18, Md Emon, 19, Tasmir Pavel, 16, and Md Saikat, 18. They are undergoing treatment at Chittagong Medical College and Hospital. They were travelling back home at Aminbazar of Hathazari after a tour of the Khoiyachora Waterfall in the hills of Mirsharai, according to accounts of rescue workers. Also read: 3 of family killed in Pabna road crash The tragedy occurred around 1.30pm at the unmanned rail crossing near Bara Takia station of the upazila in Chottgram district, police officials said. Witnesses told UNB that the Chattogram-bound Mahanagar Provati express from Dhaka ploughed through the microbus, dragging it around a kilometre down the railway track, where the train also stopped. All the casualties were from the microbus. Eleven of them died on the spot, said Khorshed Alam, in charge of Sitakundu police outpost. “There were 17 passengers on the microbus and two of them were rescued safely by members of two units of fire service deployed in the area”, said Shahjahan Sikder, deputy assistant director (media cell) of Fire Service and Civil Defence Directorate. Police said six passengers were injured and sent to hospital. “They were all tourists who went to visit Khoiyachora waterfall in Mirsharai from Aman Bazar area in Hathazari upazila,” he said. “The microbus got on the rail track breaking through a bamboo barrier at the level crossing before it was hit by the train. Rail operation on the route remained suspended after the accident,” said Ansar Ali, transportation officer of Bangladesh Railway (east). Rab nabs 4, including cop, with Yaba pills in Ctg

Rapid Action Battalion (Rab) arrested four people, including a cop, with 5,260 pieces of Yaba at Chattogram medical college area in the port city on Thursday night. The arrestees were identified as Upal Chakma, 45, a constable of special branch of Chattogram Metropolitan Police (CMP), his accomplices Nantu Dash, 42, Md Kamrul Islam, 30, and Md Gias Uddin, 42. Mokhlesur Rahman, Deputy Commissioner (DC-north) of the CMP, said on Friday that on secret information Rab members conducted a drive in front of a restaurant in the medical college area at around 10:45pm. He said the members of the elite force found the Yaba pills from the possession of the four men. Also Read: One lakh Yaba pills seized in Cox’s Bazar Md Shahidul Islam, Deputy Assistant Director of Rab-7, filed a case related to drug peddling against the four suspects at the local police station, the DC added.

A 28-year old mechanic died while repairing the engine of a ship at port city’s Banglabazar Ghat area on Monday. The deceased was identified as Md Imam Hossain, who used to work in a ship named Ot Polycon Pearls and was son of Md Yunus Bhandari from Fatikchari upazila. Also read: Two die from electrocution in waterlogged Chattogram city The incident occurred in the morning as Imam was repairing the engine in the ship and got electrocuted due to negligence, said Sadekur Rahman, Officer-in-Charge of Panchlaish police station. He was taken to Chattogram Medical College and Hospital in a critical condition where the doctor announced him dead on arrival. Also read: 3 brothers’ wives all die of electrocution in N’ganj His body was sent for an autopsy, said the OC.

Incessant rainfall for the last three days caused waterlogging in low-lying areas of Chattogram port city. Some people were seen wading through knee to waist-deep water to reach their destinations in the morning due to lack of transport. Office-goers and others had to pay extra fares to reach their workplaces. Also read: Heavy downpour floods Chattogram city; 4 killed in landslides Many areas including Bakolia, Agrabad, Muradpur, No 2 Gate, Bohoddar Hat were submerged by rainwater, triggering traffic jam in different parts of the city. 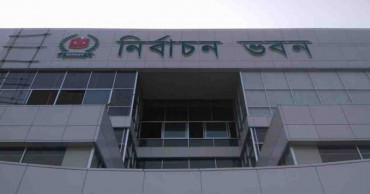 The Election Commission has suspended the election of Eochia Union Parishad in Satkania upazila in Chattogram. Also read: EC suspends Chambal UP election in Ctg In a press release on Sunday the commission said a decision has been made to suspend the announcement of the election schedule of Eochia UP slated for June 15 until further notice. The commission asked to issue public notice and take systematic actions according to the decision to the concerned authorities.

Two Rab members among 3 thrashed by locals in Ctg

Three people, including two Rapid Action Battalion (Rab) personnel, were badly beaten up by locals in Mirsarai upazila on Wednesday night after being mistaken as robbers, officials said. The injured Rab men have been identified as Kausar, 29, and Mokhles Uddin, 33. The other victim has been identified as Rab informer Pervez, 28. Also read: Lalmonirhat lynching: 38 surrender, sent to judicial custody The two Rab members were brought to Dhaka for better treatment by a helicopter around 9.30pm, said Rab's senior assistant director (media) Nurul Absar Chowdhury. The trio went to Baroiyarhat Municipality Bazar in a car around 8.45pm to gather information about drugs-business in the area, the Rab said in a release. Also read: Three robbers lynched in Manikganj, two die Suspecting them as robbers, local people thrashed them, leaving the three injured. On information, a team of Rab-7 rushed to the spot and rescued them.
Man arrested for raping minor girl after abduction in Ctg
Freight operation from Ctg suspended as lighter vessel workers on strike
Fire at Eastern Refinery in Ctg, main installation not impacted: Officials
2 boys tied to pole and tortured by cops in Ctg
11 tourists killed, 6 injured after train hits microbus in Ctg
Rab nabs 4, including cop, with Yaba pills in Ctg
Ship engine mechanic dies of electrocution in Ctg
Parts of Ctg port city go under water amid incessant rains
EC suspends Eochia UP election in Ctg
Two Rab members among 3 thrashed by locals in Ctg