The High Court on Thursday threw out two defamatory cases filed against Shoaib Chowdhury, editorial board chairman of The Asian Age newspaper by Exim Bank and NASSA Group. A bench of Justices ASM Abdul Mobin and Md Atwar Rahman passed the order during a hearing on a petition seeking dismissal of these cases. Barrister Mahbub Shafiq appeared for the petitioner. Read more: HC orders speedy disposal of graft case against Gayeshwar He said charge sheets in these cases were submitted to court in 2020. After that a petition was filed seeking quashing of the proceedings in these two cases, he said. On October 24, 2019, The Asian Age published a report titled “A monster behind spoiling banks.” On November 5 that year, Exim Bank’s senior assistant vice president Mizanur Rahman Chowdhury and NASSA group consultant Lieutenant Colonel (retd) Sirajul Islam on November 11, filed two separate cases of defamation against six journalists of The Asian Age including Shoaib Chowdhury for that report. On June, 2020, Police Bureau of Investigation (PBI) submitted charge sheet in these cases against only Shoaib Chowdhury.

Amber Heard notified a Virginia court Thursday that she will appeal the $10.35 million judgment she was ordered to pay ex-husband Johnny Depp during a high-profile defamation trial that exposed the inner workings of their troubled marriage. Heard's lawyers filed a notice of appeal in Fairfax County Circuit Court, where a six-week trial featured riveting testimony from both Heard and Depp. The document notifies the Virginia Court of Appeals that Heard intends to appeal the judgment, as well as rulings the judge made after the verdict, including rejecting Heard's request to set aside the verdict and dismiss the lawsuit or order a new trial. “We believe the court made errors that prevented a just and fair verdict consistent with the First Amendment. We are therefore appealing the verdict,” a spokesperson for Heard said in a statement. “While we realize today’s filing will ignite the Twitter bonfires, there are steps we need to take to ensure both fairness and justice.” Depp sued Heard for libel over a December 2018 op-ed she wrote in The Washington Post describing herself as “a public figure representing domestic abuse.” Depp’s lawyers alleged he was defamed by the article even though it never mentioned him by name. Heard filed counterclaims, alleging that Depp's former lawyer defamed her by publicly characterizing her abuse allegations as a hoax. Also read: Heard faces high legal hurdles seeking to reverse Depp win The jury ordered Heard to pay Depp $10 million in compensatory damages and $5 million in punitive damages. The punitive damages were reduced to $350,000 under a state cap. The jury awarded Heard $2 million on her counterclaim. Much of the testimony during the six-week trial focused on Heard’s claims that she had been physically and sexually abused by Depp at least a dozen times. Depp insisted that he never hit Heard and that she was the abuser. “The jury listened to the extensive evidence presented during the six-week trial and came to a clear and unanimous verdict that the defendant herself defamed Mr. Depp in multiple instances," a spokesperson for Depp said in a statement. "We remain confident in our case and that this verdict will stand." Also read: Amber Heard says she doesn't blame jury in Depp libel case The High Court on Thursday has granted permanent bail to BNP Chairperson Khaleda Zia in two defamation cases. From now on, the BNP chief will remain on bail until the end of the cases’ procedures. The bench of Justice Jahangir Hossain and Justice Shahed Nuruddin passed the bail order by disposal of the rule in two cases. Also read: Khaleda shifted to cabin from CCU Khaleda’s counsel Kaisar Kamal stood for her while Deputy Attorney General Sarwar Hossain Bappi represented the state. AB Siddique, president of Bangladesh Jananetri Parishad, a pro-Awami League organisation, filed the cases against Khaleda Zia accusing her of hurting the religious sentiment of the Muslims and for making derogatory comments on Bangabandhu Sheikh Mujibur Rahman on October 21, 2014, and on January 25, 2017, respectively.  Also read: Khaleda must follow legal process for treatment abroad, says Home Minister Condemning the issuance of an arrest warrant against its chairperson Khaleda Zia in a defamation case by a Narail court, BNP on Thursday said it has exposed Prime Minister Sheikh Hasina’s ‘political vengeance’. A court in Narail has sentenced BNP’s Senior Vice Chairman Tarique Rahman to two years in jail for making derogatory statement against Bangabandhu in 2014. A Dhaka court on Thursday threw out a defamation complaint against BNP Chairperson Khaleda Zia and her son Tarique Rahman accusing them of instigating Islamists leaders to deliver anti-sculpture speeches. 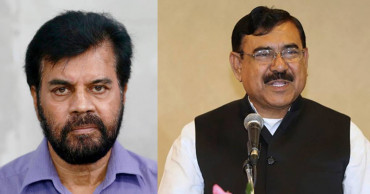