A 60-year old man was killed and at least 20 others were injured in a clash between two groups of villagers over collecting extortion money from pickup vans in Nabinagar upazila of Brahmanbraia on Saturday. The deceased was identified as Shital Mia from Muktarpur village in the upazila. At least six houses were set afire and several others were vandalised during the clash, said witnesses.   According to locals, on Friday evening Ibrahim Mia from Muktarpur village had an altercation with Rahim Mia of Dharabhanga village who works as lineman of Salim Ganj Bazar.  Read more: 15 injured in BCL factional clash at CU They locked into an argument as Rahim demanded Tk 200 as extortion from a pickup van that was unloading logs at Ibrahim’s father Kabir Hossain’s sawmill. On Saturday morning, some residents of Muktarpur village allegedly beat up Manik and Khokon Mia of Dharabhanga village over the same incident. As the news spread some residents of Dharabhanga village attacked Muktarpur village with locally made sharp weapons, triggering a clash that left  Shital Mia and several others severely injured. They also looted valuables and vandalised houses. Shital Mia died on the way while being taken to Dhaka for treatment, said Saifuddin Anwar, officer-in-Charge of Nabinagar police station. Read more: JCD leader’s death in B’baria clash: SP, ASP among 8 sued Malek Mia, Dulal Mia, Mehedi Hasan, Amir Mia, Suman Mia, Royal Mia, Mohammad Ali were among the injured. OC Saifuddin said police brought the situation under control and then additional police were deployed in the area. Two police personnel including  an inspector sustained bullet injuries in a gunfight with drug dealers as the criminals ambushed them to snatch away their arrested comrade in Nabinagar upazila of the district early Friday.  The injured cops are Nabinagar Police Station’s Inspector (investigation) Mohammad Sohel and Sub-Inspector Rony Soro Rana. Sohel, who was hit in the head, is undergoing treatment at Nabinagar Upazila Health Complex, and Rana at a hospital in Cumilla. Saifuddin Anwar, officer-in-charge of the police station, said one Mannaf alias Monek and his son Shipon are accused in several cases including drug peddling, robbery, murder and rape. Mannaf was released from jail a few days back, but got involved in drug dealing again with his accomplices, the OC said. A team led by Inspector Sohel conducted a drive in Nurjahan village of Barikandi union early Friday and arrested Mannaf from his home. However, absconding Shipon along with accomplices ambushed the team bringing Mannaf to the station, and a gunfight ensued, said OC Saifuddin. Read: Muggers strike with sharp weapons, make off with Tk 5 lakhs from Rocket agent SI Rana was shot in the head, and Inspector Sohel in his arm, while the criminals managed to escape with Mannaf. An assault case was filed accusing four named individuals, and 4 unnamed. Molla Mohammad Shaheen, additional superintendent of police, said they are trying to nab all of the accused.

When a retired ACC official in Brahmanbaria listened to his conscience

Travelling without a ticket may be a common offence. But after travelling without tickets for many years, a 61-year-old retired Anti-Corruption Commission (ACC) official chose to listen to his conscience. Emdadul Haque, a resident of Kanikara village in Nabinagar upazila, came back to Brahmanbaria railway station on Monday and paid Tk 2,350 to the station master. "The amount was due to the railways as all these years I travelled without a ticket to Dhaka from the district. Now I will get peace of mind," said Emdadul. Also read: Probe body formed over Natore train derailment Chief booking assistant of Brahmanbaria railway station, Kabir Hossain Talukder, said he was really moved by Emdadul's gesture. “We issued tickets worth Tk 2,530 for an intercity train, Mahanagar Provati, from Brahmanbaria to Chattogram so that Emdadul can 'repay his debt'. His honesty is an inspiration for all of us,” he said. Emdadul’s son Imran said his father is basically a man of integrity. “During the last year of service, he travelled to Dhaka from Brahmanbaria several times without a ticket but kept an account of it," he said. Also read: Unmanned rail crossings are mostly to blame for rail accidents

Gas supply to remain suspended in B'baria for 3 days

Gas supply will remain suspended in Sadar and Sarail upazilas of Brahmanbaria for three days till 6am on Wednesday. Bakhrabad Gas Distribution Company Limited authorities have decided to suspend gas supply due to transfer work of a gas pipe line under the Four Lane Highway Upgradation Project from Ashuganj Land Port to Akhaura Land Port, said MD Akhtaruzzaman, Deputy General Manager of the head office of the Gas Distribution Company. Read: Consumers experiencing shortage, low pressure in gas supply Gas pipe line transfer work will be conducted on the four-lane road from 6 am on Sunday to 6 am on Wednesday, he added. The residents were informed about the gas supply suspension through announcement in different areas udner the two upazilas. 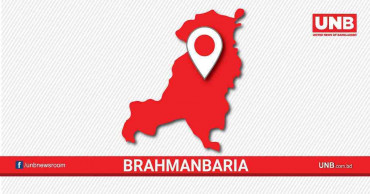 One killed over land dispute in Brahmanbaria

A man was killed and 15 others were injured in a clash between two groups over land dispute in Nasirnagar upazila of Brahmanbaria early Monday. The deceased was identified as Akter Mia, 40, son of late Khurshed Ali from Guniyauk village of the upazila. According to the deceased’s family, Akter and his cousin Dulal Mia were at loggerheads over a piece of land for a long time. Read: Man killed by wife in Brahmanbaria A clash broke out between the supporters of the two around 9:30pm on Sunday, which left 15 people injured including Akter and Dulal. Eleven of the injured were rushed to Brahmanbaria General Hospital where Akter succumbed to his injureis at about 1:00am. Officer-in-charge of Nasirnagar police station Habibullah Sarker said that the body of the deceased has been kept at the hospital’s morgue for autopsy. Police have been deployed in the area to avert further trouble, said the OC.

Police arrested three people including a woman with 1,200 pieces of Yaba from Nabinagar municipality area of Brahmanbaria Thursday night. The arrestees have been identified as Liton Dev, his wife, Moni Rani Dev, and accomplice Mainul Islam. They are residents of Nabinagar municipality. Aminur Rashid, officer-in-charge (OC) of Nabinagar police station, said on secret information they conducted a drive at the house of alleged drug peddler Liton Dev on Thursday night. He said police team found the Yaba pills from the possession of the trio during the drive. Read: Rab nabs 4, including cop, with Yaba pills in Ctg A case related to drug peddling against them was filed at the local police station; the OC said adding that the arrestees have several earlier cases on drug peddling against them.

Two children, both cousins aged three, have drowned in a pond in Brahmanbaria’s Kasba upazila, police said on Friday. The deceased were identified as Mosaiba Akhter, daughter of Jewel Miah of Tinlakhpir village of the upazila, and her cousin Sanaul Haque. Also read:Rohingya boy drowns in Bay of Bengal The tragedy occurred in Tinlakhpir village of the upazila on Thursday. Monir Hossain, a local union council member, said Sanaul came with his family to visit his grandfather's house in the village during the Eid holidays. "In the afternoon, he was playing with his cousin when both of them fell into the pond and downed." Also read: 2 children drown in Barishal Officer-in-charge of Kasba Police Station, Mohammad Alamgir Bhuiyan, said that cops were sent to the spot "after we were alerted".

The four-lane road construction on Comilla-Sylhet highway has caused waterlogging inside the Bangladesh Small and Cottage Industries Corporation (BSCIC) industrial park in Brahmanbaria. The canal along BSCIC park in Nandanpur area of the Sadar upazila has recently been filled due to the road construction. For this, the factories in the park have no place to drain the wastewater. Thirty of the 68 factories in the park are now under water, said the factory owners. READ: BSCIC reopened 715 industrial factories in 13 years, Industries Minister tells parliament Factories including Abdul Monem Limited, Munni Soap, Ma-Mani Soap, Alam Chemical, Subarna Ice Cream, Babul Chira Mill, Bhai Bhai Mudir Mill, Kasem Metal, Ratan Food, Rahima Love Well, Jabed Metal, Bhai Bhai, Mannan Chemical and Apon Major Flower Mill are waterlogged. Besides, officials and employees are suffering too as the park premises went underwater.   The factories couldn’t resume work for the last five days, owners claimed. Md. Zakir Hossain, owner of Suvarna Ice Cream factory, said that the canal was used for draining wastewater since the park was established in the 90s. "We have talked to the authority for building a drainage system. It’s not possible for us to do it as it’s a government run park," he said. Khandaker Golam Mostafa, director of the four-lane project, told reporters that part of the canal area was owned by the Roads and Highways Division. "BSCIC has no place here. BSCIC authorities will have to decide where they will dump the wastewater. They have also been asked to make their own arrangements for this. We will provide necessary assistance," he said.

Police on Thursday arrested on murder charges the mother of the two siblings who died after consuming Napa syrup in Brahmanbaria. The deaths of the two children shook the entire country and raised a question over the quality of Napa syrup. Read:Napa deaths: DGDA claims syrup was safe Police claimed that Lima Begum had killed her two children over an extra-marital affair.  "Our team nabbed Lima, the mother of the two children, from her house in Ashuganj upazila of the district this morning," said additional superintendent of Brahmanbaria Police, Molla Mohammad Shaheen. The arrest came following an investigation which revealed that Lima had developed an illicit affair with a man, named Shafiullah, while working at a local rice mill, the police officer told the media. "Lima and the man wanted to get married. And to make their plan successful, Lima offered sweetmeat laced with poison to her two children, which caused their deaths,"  Shaheen said. While Lima has admitted her guilt during questioning, efforts are on to arrest Shafiul, said Shaheen. Ismail Khan, the father of the two children, had lodged a complaint at the Ashuganj police station, following the deaths of their two children. Based on the complaint, an FIR was registered by police. On March 10, the two siblings -- Yasin Khan, 7, and Morsalin Khan, 5 -- allegedly died after consuming Napa syrup at their home as they were down with high fever. It was bought from the local ‘Ma Pharmacy’ owned by Main Uddin. The children were discharged after being given primary medications at District Sadar Hospital. Yasin died on the way home, and Morsalin after reaching home, the family said. Read: Health Minister vows legal action in Napa deaths of two siblings Two probe bodies have been formed in this connection, while samples of the syrups of the same batch were collected for testing. After testing, officials of the Directorate General of Drug Administration (DGDA) on Monday said the batch of the Napa syrup was found to be "safe".
1 killed, 20 injured in B’baria clash
IBBL opens Sarail branch in Brahmanbaria
Brahmanbaria: Drug dealers ambush police, make off with arrested comrade
When a retired ACC official in Brahmanbaria listened to his conscience
Gas supply to remain suspended in B'baria for 3 days
One killed over land dispute in Brahmanbaria
Police arrest 3 with Yaba pills in Brahmanbaria
3-yr-old cousins drown in Brahmanbaria
Four-lane road construction waterlogs BSCIC in Brahmanbaria
Napa syrup row: Mother held for killing kids in B’baria